It’s the latest in a growing number of drug laboratories discovered by Mexican authorities this year. by Kendal Blust, Fronteras Desk TWEET SHARE 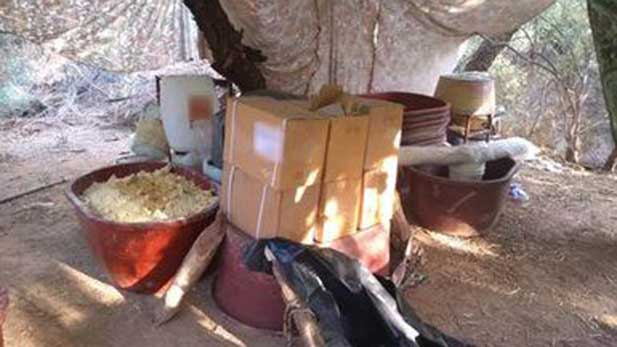 HERMOSILLO, Mex. — The Mexican military found chemicals and equipment needed to produce methamphetamine Tuesday at a clandestine drug laboratory near Sonoyta, Sonora, just south of the border from Lukeville.

In a press release Wednesday, Mexico's Secretary of National Defense said it found nearly 2,000 gallons and 16,000 pounds of substances used in the production of synthetic drugs at the site.

It’s the latest in a growing number of drug laboratories discovered by Mexican authorities this year. Most were producing synthetic drugs like meth or fentanyl.

“They’re producing it by the tons," said Sanho Tree, director of the Drug Policy project at Washington, D.C.-based Institute for Policy Studies.

He says U.S. drug policies have helped fuel a booming industry for synthetic drug production in Mexico. Those drugs are then smuggled into the U.S., where, he says, a resurgence of meth use is contributing to the overdose crisis.

"The border wall, if it ever gets built, will do very little to stop any of this," he added.

Sonoran hospitals in Nogales, Guaymas reach saturation Audit: Instead of migrant care, Border Patrol spent millions on equipment Sonoyta protesters allow travelers through border blockade for now
By posting comments, you agree to our
AZPM encourages comments, but comments that contain profanity, unrelated information, threats, libel, defamatory statements, obscenities, pornography or that violate the law are not allowed. Comments that promote commercial products or services are not allowed. Comments in violation of this policy will be removed. Continued posting of comments that violate this policy will result in the commenter being banned from the site.