A recently bulldozed strip of desert has sparked another wave of criticism over the construction of President Trump's border wall. by Ariana Brocious TWEET SHARE 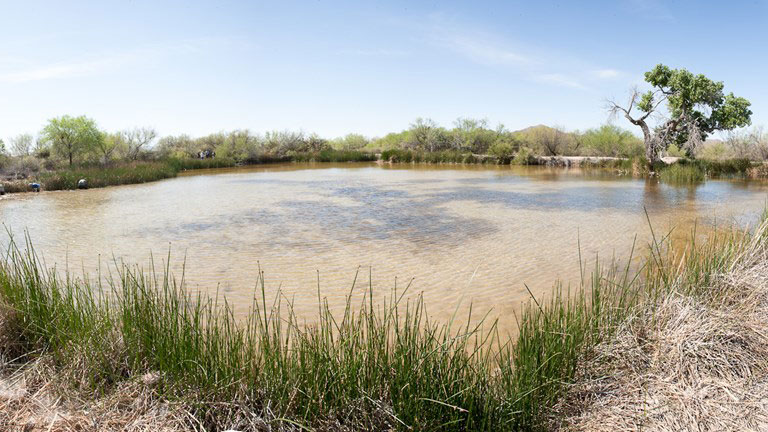 VIEW LARGER Quitobaquito pond is fed from the nearby Quitobaquito Springs. Recent construction activity near the site has drawn concern from environmental groups.
National Park Service

Environmental groups expressed outrage this week as they shared pictures of a 60-foot-long strip of border land scraped bare next to a critical desert spring called Quitobaquito.

"It's terrible. The desert isn't going to recover from this any time soon, and the archaeological sites, which may include Native American grave sites, are being destroyed forever," said Dan Millis, with the local Sierra Club chapter.

Millis says he wants to keep these concerns on the front burner even in the midst of the impeachment trial and other national news. Border wall construction is ongoing across environmentally sensitive lands, including Organ Pipe and the San Bernardino National Wildlife Refuge near Douglas.

This comes just weeks after @RepRaulGrijalva & the O'odham Tribal Chairman called for a cessation of all "ground disturbing activities" near this sacred site. pic.twitter.com/j6j3ret0dI

National Park Service officials said in a previous statement the agency has an ongoing relationship collaborating on and coordinating border enforcement with the Department of Homeland Security.

The Trump administration has waived the federal environmental review processes that would normally apply to these kinds of projects.

Customs and Border Protection was unable to comment before deadline, but in a previous statement said it "strives to ensure that impacts to biological, natural, cultural, and historical resources are identified and minimized to the greatest extent possible in all infrastructure projects."

The Sierra Club and the Center for Biological Diversity have ongoing lawsuits against the wall projects, but Millis says a Supreme Court decision is allowing construction to continue while those cases are decided.

Controlled blasts for border wall project draw criticism Arizona House votes to let landowners build border walls with no permits New letter asks Mexican officials to help stop border wall construction
By posting comments, you agree to our
AZPM encourages comments, but comments that contain profanity, unrelated information, threats, libel, defamatory statements, obscenities, pornography or that violate the law are not allowed. Comments that promote commercial products or services are not allowed. Comments in violation of this policy will be removed. Continued posting of comments that violate this policy will result in the commenter being banned from the site.