Arizona is one of 12 states that have never approved the ERA, despite regular attempts by state Democrats to do so. by Jessica Myers, Cronkite News Tweet 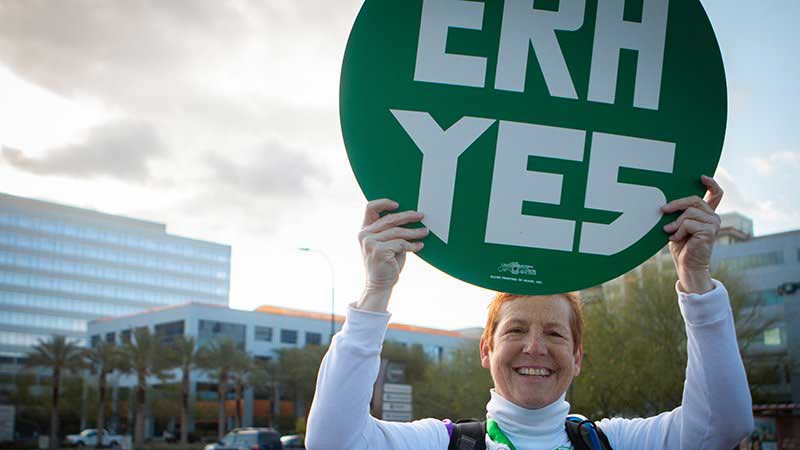 VIEW LARGER In this March 2019 file photo, Cindy Harrison rallies in Phoenix in support of the Equal Rights Amendment. Arizona has never approved the ERA, one of just 12 states not to have done so, but Virginia’s recent ratification led the U.S. House to remove a deadline for states’ ratification in hopes of reviving the amendment.
Delia Johnson/Cronkite News

WASHINGTON – Arizona lawmakers split on party lines Thursday as the House voted to give the Equal Rights Amendment another chance by removing the deadline for states to ratify the proposed constitutional amendment.

The vote came just weeks after Virginia became the key 38th state to ratify the ERA, which would have put the amendment on the Constitution – except the deadline for states to ratify it passed in 1982.

The House voted 232-183 Thursday to lift that deadline and make the amendment viable again, but Republicans like Rep. Debbie Lesko, R-Peoria, called it an unconstitutional effort to revive a “dead” amendment.

“I am a woman, so I obviously care and support equal rights for women,” Lesko said in floor debate. But states had their chance to ratify 40 years ago, she said, and now it’s too late.

Just five Republicans – none from Arizona – sided with all Democrats in the vote to lift the deadline. Supporters said the deadline should be removed because, “There is no timeline on equality.”

“We just passed a bipartisan resolution to finally remove an arbitrary deadline to ratify the ERA,” Rep. Greg Stanton, D-Phoenix, said in a tweet Thursday. “My #ERAVote was a vote for equality.”

The ERA would add an amendment to the Constitution stating, “Equality of rights under the law shall not be denied or abridged by the United States or by any state on account of sex.” First proposed in 1923, it was approved by Congress in 1972 and sent to states for ratification by 1979.

But deadline was extended to 1982, by which time just 35 states ratified the ERA, three shy of the 38 needed to add it to the Constitution. Hopes were revived beginning in 2017, when Nevada approved the ERA, followed by Illinois in 2018 and Virginia this year.

While five states have voted to rescind their ratification, ERA supporters say such reversals are not recognized as valid.

Arizona is one of just 12 states that have never approved the ERA, despite regular attempts by state Democrats to do so and the backing of Supreme Court Justice Sandra Day O’Connor, then a state senator, that saw the Senate ratify it in the 1970s, but not the House.

Ratification resolutions have been introduced again this year in the Arizona Senate and House, but have not been voted on.

Opponents like Cindy Dahlgren of the Center for Arizona Policy said the ERA is not necessary and may have the potential for reversing women’s gains.

“Women cannot be more protected from discrimination than they already are under the Fifth and 14th Amendment,” said Dahlgren. “And there are no rights that men have that women don’t have right now.”

That was echoed by Lesko, who said while the ERA may sound good, “women’s equality of rights under the law is already recognized in our Constitution.”

She also argued, along with many opponents in the House, that the ERA could be used to strike down pro-life laws and make abortions easily attainable nationwide.

“If ratified, the ERA would be used by pro-abortion groups to undo pro-life legislation and lead to more abortions and taxpayer funding,” she said.

ERA supporters call that argument a red herring, noting that the Supreme Court has already recognized a constitutional right to an abortion. As for equal rights laws that currently protect women, they say, such laws can be reversed easily while a constitutional amendment cannot.

“Women across the country have made great strides and progress in terms of legally protected gender equality, however, it is not enshrined in our U.S. Constitution, which is the founding document upon which all of our laws are based and interpreted,” said Krista Joy Niles, the outreach director of the Alice Paul Institute, a nonprofit behind the ERA project.

Dianne Post, an Arizona-based human rights attorney, said the claim that the deadline for ratification cannot be lifted “is completely false.”

“The procedure of how to pass a constitutional amendment does not require that there’s a timeline,” she said. “Think of the fact that we passed the 27th Amendment 202 years after it was first introduced. So talk to me about a timeline.”

Supporters said the ERA is the right thing to do, and past due.

“Women are tired of being second-class citizens in their own country,” Rep. Raul Grijalva, D-Tucson, tweeted. “Decades without the ERA has meant unequal pay and discrimination of the basis of sex. We’re done with living in the past.”

Rep. Tom O’Halleran, D-Sedona, said at a time when “American women face a gender pay gap, sexual harassment and pregnancy discrimination in the workplace ... we must ensure the ERA is ratified so that every American is guaranteed equal right under the law.”

The measure still must pass the Senate, where a companion bill has 44 co-sponsors, including two Republicans. But Post is confident.

“It’s become quite clear that we won, we are winning, we are going to win,” Post said. “And that’s really scaring them to death because the patriarchal power to which they feel entitled due to centuries of being entitled is ending.”

State Senate votes for ethics investigation of Rogers after social media posts on mass shooting Arizona lawmakers face ethics complaint over nonprofit work House ethics panel tables complaint against Democratic lawmaker
By posting comments, you agree to our
AZPM encourages comments, but comments that contain profanity, unrelated information, threats, libel, defamatory statements, obscenities, pornography or that violate the law are not allowed. Comments that promote commercial products or services are not allowed. Comments in violation of this policy will be removed. Continued posting of comments that violate this policy will result in the commenter being banned from the site.