Arizona could be closer to New York and Washington state than test numbers indicate. by Jake Steinberg Tweet 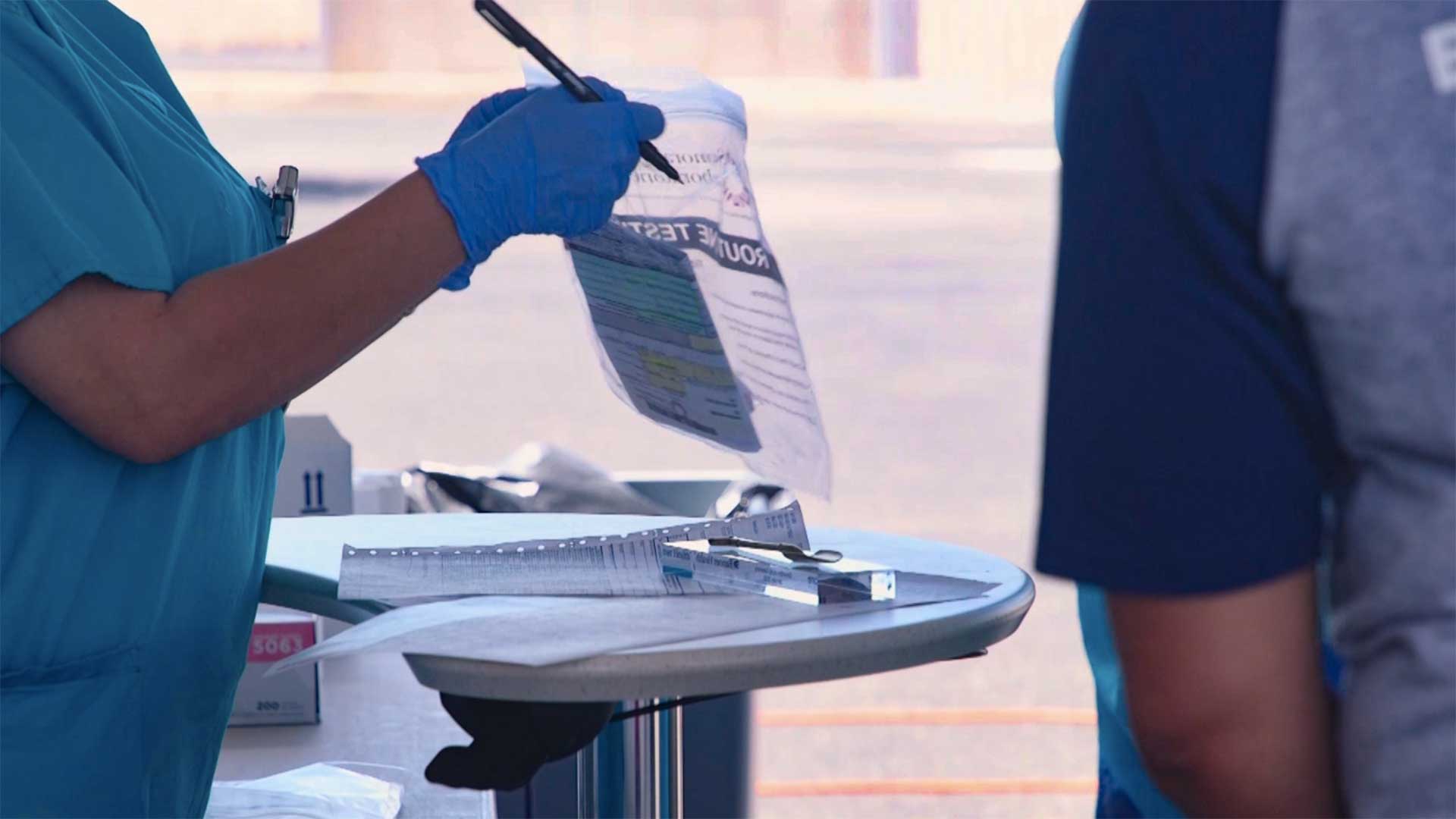 Banner Health workers seal a collection kit at a drive-thru testing site, in this undated still image from video. Banner says the testing is by appointment only.
Courtesy Banner Health

Update: This story has been updated to reflect the state's Friday afternoon release of Arizona's private lab testing numbers.

It started with a dry cough. But at the time, Oro Valley resident Jack Harper wasn’t even thinking about the new coronavirus.

"When I thought I was getting sick, all I knew about it then was that it was happening in China," he said.

That was two weeks ago, before President Trump declared a national emergency and the country began to shut down.

Harper, 31, decided to self-quarantine, just to be safe. He doesn't have a primary care physician, but last week he heard Banner Medical Center in Tucson was opening a drive-through testing center. After waiting in line for over an hour, he was told he wouldn’t be able to get a test, and was sent home. The same thing happened when he went back the next day, after his symptoms got even worse.

"You hear shortness of breath, what I think to myself is the feeling you'd feel when you just finished running really hard. You know and you can still catch up to it kind of thing. But it's a strange feeling where your lungs can fully expand and yet it's not helping," he said.

Despite his symptoms, Harper still hasn’t been tested for COVID-19.

Arizona ramped up its capacity to test for the novel coronavirus this week, with the state’s largest hospital system opening drive-through testing centers. The state's official count of COVID-19 cases more than doubled from Monday to Friday. But health experts warn the number of reported cases is just a fraction of how many are really out there.

Because there are still so few testing kits available, only the most vulnerable members of the community can be tested. According to criteria set by the Centers for Disease Control, first priority are hospitalized patients and health care workers with symptoms. Then, it's older adults and people with underlying health conditions.

Young people are not a priority. But according to Kacey Ernst, an epidemiologist at the University of Arizona, they’re the ones most likely to be spreading the virus. She compared the situation to an iceberg.

She said low rates of testing means it's hard to know how many cases are really out there, but it could be as many as 10 cases for every one reported.

The Arizona Department of Health Services has started discouraging primary care providers from testing most patients, according to guidance issued Wednesday by ADHS director Cara Christ.

"The current reality in Arizona and the rest of the country is that there are not enough available supplies to meet testing demand." she said. "Clinicians should consider removing this diagnostic 'tool' from their toolbox and managing patients with respiratory conditions as if they have COVID-19."

It’s difficult to get a complete picture of testing in the country because states have disparate reporting and testing policies. Until Friday, only tests sent to a health lab were included in public testing numbers in Arizona. Gov. Doug Ducey signed an executive order on Monday requiring private labs to report testing numbers. They previously only reported positive cases.

THE FACTS: More than 10,000 tests have been conducted & counted through private sector labs. The governor issued an executive order implementing enhanced surveillance of private-sector testing, and we are working to add these stats to the site ASAP. https://t.co/Dubo0sfeEy

According to data released Friday by ADHS and the website covidtracking.com, a project run by an independent group of scientists and journalists collecting testing numbers for each state, Arizona’s testing rate is comparable among some states but lags its neighbors.

Experts say Arizona's testing rate is low enough to conceal the spread of the virus in the state.

"So it may seem like we have less of the virus than we actually do compared to Washington state and New York state that have just tested so many more people," said University of Arizona biologist Michael Worobey, who studies virus evolution.

That matters, because Gov. Doug Ducey isn't enforcing major social distancing measures like restaurant and bar closures in counties until they register official cases, which means the virus has been given more time to spread. As of Friday morning, Gila and Greenlee counties were still reporting zero confirmed cases, according to the state.

Ernst said Arizona is still early in the outbreak, but if our trends follow other states, cases could explode next week. She said it's too late for efforts to contain the spread of COVID-19 to hinge on reported cases.

"It's still not as available as what would be useful to use testing as a strategy to isolate and contain the outbreak," she said. "When you don't have testing, it means that you're basically trying to operate blind."

Even with the University of Arizona producing thousands of testing kits a week, it will be a while before everyone who wants a test can get one. So the best measures are still for everyone to act like they’re carrying the virus. Stay home, keep your distance from others, and wash your hands.

Harper has been able to work from home. He doesn't mind it. He describes himself as an introvert.

"That was actually an awakening to how serious this could become. I don't have a lot of contact. I don't shake people's hands. I already wash my hands 40 times a day," he said.

He said he's currently on the mend and continues to self-quarantine. He encourages other young people to do the same.

"It shouldn't be about if you're healthy enough to fight this thing off then everything should just be normal for you," he said. "There's going to be a lot of unnecessary pain and suffering due to such a selfish decision to go out and continue to spread this thing."

If you think you should be tested for COVID-19, Banner Medical Center is requesting you call 1-844-549-1851. You will not be tested if you show up without an appointment.

UA mobilizes research resources in fight against coronavirus COVID-19 highlights need for school counselors COVID transmission rates dropping in Arizona
By posting comments, you agree to our
AZPM encourages comments, but comments that contain profanity, unrelated information, threats, libel, defamatory statements, obscenities, pornography or that violate the law are not allowed. Comments that promote commercial products or services are not allowed. Comments in violation of this policy will be removed. Continued posting of comments that violate this policy will result in the commenter being banned from the site.