Beyond Sprawl: The Southwest Zombie Problem

After an historic housing crisis, the Fronteras Desk asks: is it time to reconsider the way we’ve built the Southwest? This is part one of the special Fronteras Desk four-part series, Beyond Sprawl, airing December 12-15 on NPR 89.1FM/1550AM.

PHOENIX — Homebuilders have long made a living expanding the edges of Southwestern cities. But look around these days and you’ll find construction projects that have screeched to a halt.

Up to 1 million lots in Central Arizona were in some stage of approval for new homes when the market crashed, according to the Sonoran Institute.

Many were set aside for long-term developments. Others were graded and ready for construction. All through the suburbs of Phoenix, it’s easy to find vast swatches of empty land once prepped for two-by-fours and work crews. 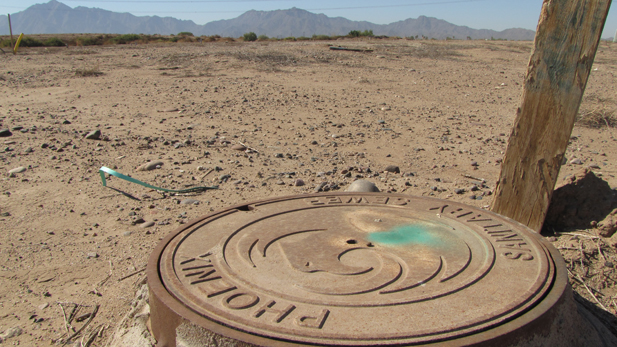 Over the years in West Phoenix, Realtor Greg Swann has watched the Laveen Farms neighborhood boom, and then bust. In the distance, the Estrella Mountains pose an intimidating natural backdrop. At his feet, utility stanchions for cable and telephone lines emerge like errant whiskers from the desert floor.

An unused fire hydrant stands alone in the dirt.

This is a zombie subdivision. Where some city planners see a problem – a breeding ground for blight and dust – the realtor sees opportunity.

"At some point, sometime soon, this land will be profitable again and it will turn into houses," Swann said. "You’ll drive by here five years from now and it will be completely different. That’s the way Phoenix works. Phoenix changes like dreams."

Swann and others in real estate industry expect Phoenix to double in size – to 8 million people – over the next several decades. What if it doesn't?

Should We Prepare for Decline?

Tufts University Professor Justin Hollander wrote a book called Sunburnt Cities. It's about an idea called Smart Decline, and how it could provide relief in stagnant parts of the Southwest.

What happens if optimistic growth projections don’t pan out, Hollander wondered. After the bust, more than one-third of zip codes in major Sun Belt cities saw population declines, according to his research.

"People are leaving,” Hollander said. “And all the houses, and the infrastructure that supports those houses, it doesn’t just disappear."

Places like suburban Phoenix, Southern California and Nevada were particularly hard hit, but those places have done little to confront the problem, Hollander said. They haven't done a good job rethinking uses for the unused infrastructure.

"If you don’t do a good job, it further destabilizes the neighborhood,” the professor said. “It further creates a cycle of disinvestment."

Hollander points to Rust Belt cities that languished for a generation before recognizing the depths of their anemia.

In the West, a comparison between Detroit and Phoenix is a hard sell.

"I tend to assume that we will grow again," said Jim Holway, from the Tucson-based Sonoran Institute, a group that promotes sustainable development in the Rocky Mountain region.

"Is it possible the forces that drove the growth in the West really have come to an end, and we’re going to face decline? I think it’s unlikely, but I can’t say it’s impossible," said Holway, a longtime planner in the region. "Certainly this is a time for creative thinking."

And there is creative thinking.

Holway says letting land go back to nature – farming and parks – is one solution for the most unattractive zombies.

Farmers across the country are reclaiming land from developers, according to the Wall Street Journal. One Arizona dairy farm paid $8 million for a large alfalfa field that developers had planned to use for houses. The land had fallen into foreclosure.

"Some of these far-flung subdivisions, people really do want them to go away," the planner said.

Holway believes the defunct land closest to the urban core still has a chance. Some day, demand will breathe life back into the market, and just as planned, the dirt will become new houses.

There is a third alternative: Re-plan.

A Chance to Breathe in Maricopa, Ariz.

During the housing boom, the city of Maricopa came to life. Literally. The town was incorporated in 2003.

At the future site of a Catholic church, land once set aside for new homes in Maricopa, Ariz. has been rezoned for mixed-use development.

Now, Billingsley can easily find empty dirt lots in his city. Many of them have the development infrastructure in place – sidewalks, hydrants and land bladed for new roads.

"Everyone has taken this turn, this chance, this opportunity to catch our breath and take a look at how we want to grow in the future," Billingsley said as he stood on a dirt lot once set aside for 182 homes.

The land has been rezoned for mixed-use development. The Catholic Church bought the parcel, and now instead of tumbleweed and dust, there are plans for a private school, shops at ground level and loft-style housing above. This type of creative, diverse development just didn’t happen before.

"We’ve been at a balance now for a few years and been able to catch up and to be smarter," Billingsley said.

It will still take Maricopa years to swallow the 16,000 lots set aside for residential development. Public swimming pools, police stations, baseball fields, and schools will replace some of the zombie lots.

It’s acknowledgement that times have changed.

"There's a real opportunity to build community," Billingsley said. "In the planning world, we call it a sense of place."

Number of Mexicans granted work visas in the U.S. increases Arizona minimum wage workers get a raise this year Report: Arizona teaching vacancies continue to rise
By posting comments, you agree to our
AZPM encourages comments, but comments that contain profanity, unrelated information, threats, libel, defamatory statements, obscenities, pornography or that violate the law are not allowed. Comments that promote commercial products or services are not allowed. Comments in violation of this policy will be removed. Continued posting of comments that violate this policy will result in the commenter being banned from the site.