In grasslands plagued by invasives and drought, wildfires fuel calls for new solutions 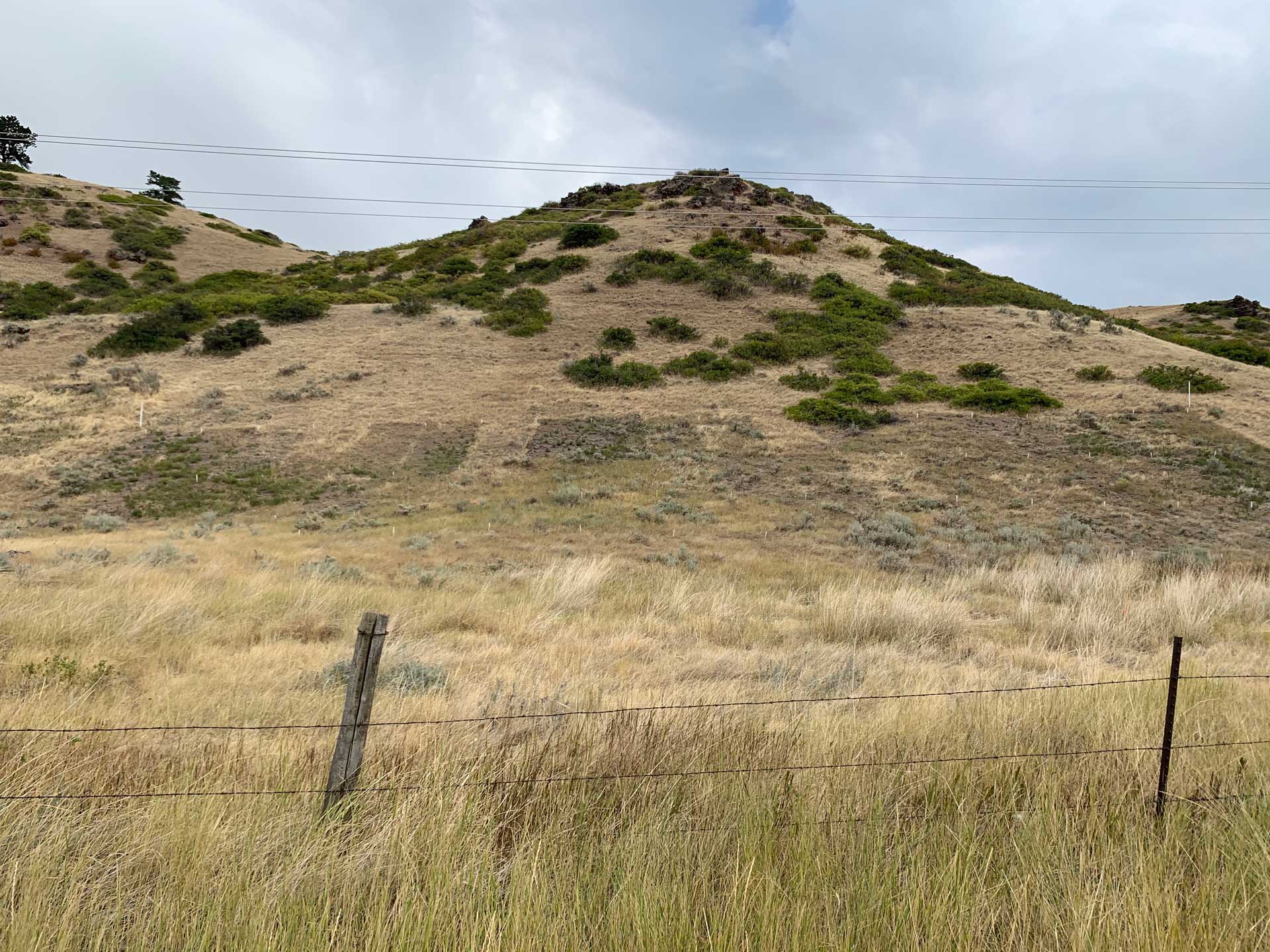 Eighteen plots are laid out on the hillside on Brian Mealor’s property in Sheridan County, Wyo. Mealor is studying how differing amounts of herbicide sprayed at different times of year can be used to manage invasive species.
Catherine Wheeler/Wyoming Public Radio

On the side of a rocky hill in Sheridan County in northern Wyoming, Brain Mealor is showing off all of his weeds.

“Here, let me grab a cheatgrass so you can see it, too,” he said, plucking a wispy sprig from among the grasses. “They all kind of look the same this time of year.”

Mealor is the director of the University of Wyoming’s Research and Extension Center in Sheridan. He’s performing experiments on how to manage and kill invasive annual grasses, like cheatgrass, ventenata and medusa head, with herbicides. 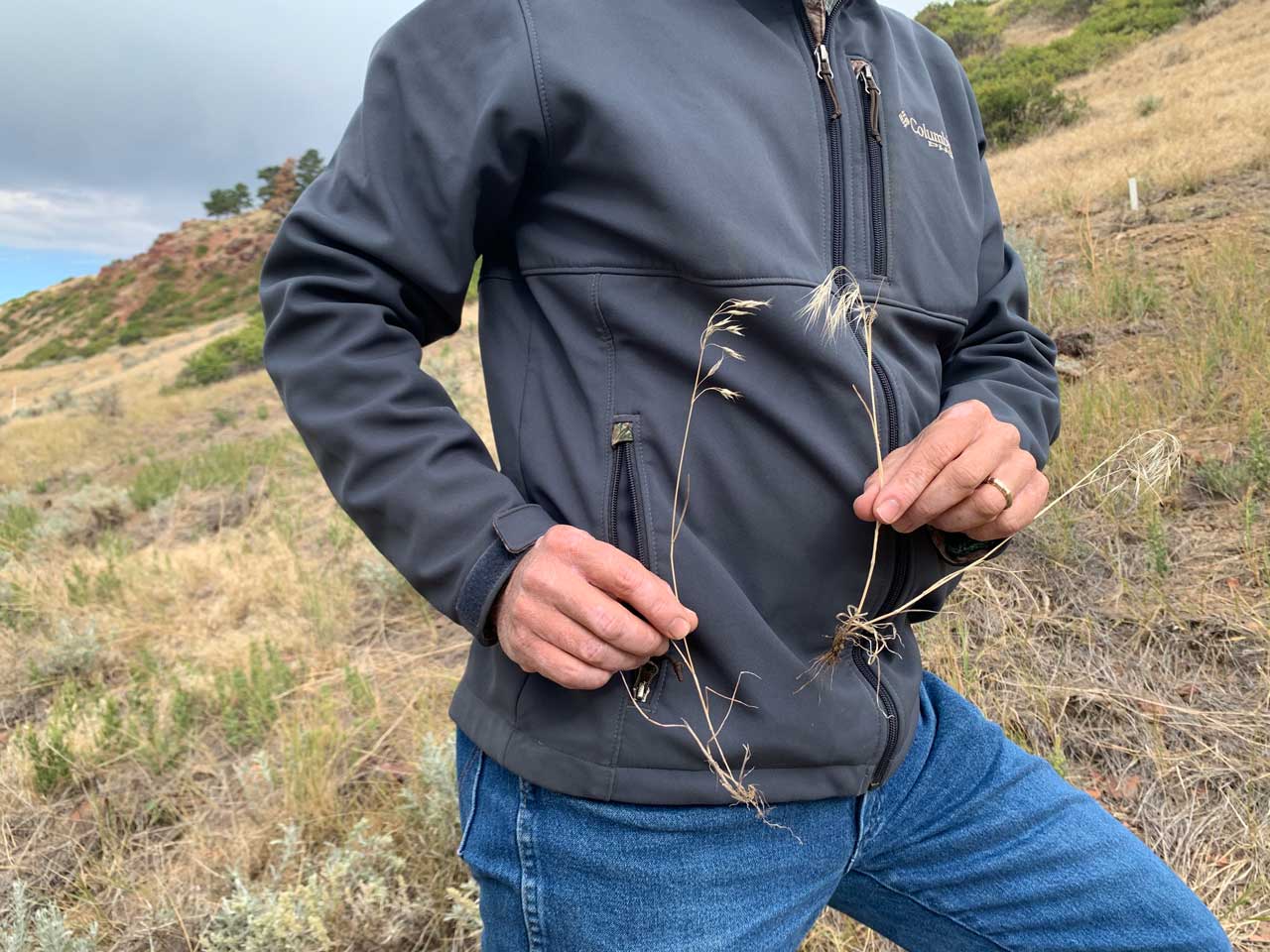 Brian Mealor holds up a sprig of Japanese Brome and Cheatgrass to compare how similar both invasive species are.
Catherine Wheeler/Wyoming Public Radio

His goal is to restore rangeland to its more natural state and as a result hopefully make events like drought-fueled wildfires less devastating.

Images of this year’s most devastating wildfires across the West have shown forests of ponderosa, spruce and lodgepole engulfed in flames. Fires on grasslands and rangelands may not capture as much coverage, but can be just as landscape-altering as forest fires. Plus, they can spread more rapidly, and in some cases, cause more damage than fires in forested areas.

Across the West, the increasing prevalence of invasive plants, and the growing influence of climate change, is changing the relationship between vast rangelands, drought, and wildfire.

It’s helpful to understand what these uninvited guests are and why they are harmful to this environment. There are three characteristics that make plants invasive, said Dan Tekiela, an invasive plant extension specialist at University of Wyoming.

To start with the easiest, they aren’t from here.

“Generally, we think of something coming from another country, crossing an ocean or a large boundary,” Tekiela said.

Secondly, their foreign nature allows them to spread easily, overwhelming native plants, causing negative impacts to the area, he said.

In Wyoming and much of the West, those impacts come to ranchers on rangeland, where these invaders can take over areas meant for grazing. That means less vegetation for livestock and wildlife to eat, making the land harder to use.

Lastly, like all strong enemies, the invasive plants are hard to eradicate.

“In most cases, the reason they’re so successful is that they aren’t particularly good to eat,” he said. Though, Tekiela said cheatgrass, a widespread invasive plant, can be used as a food source for animals when it’s green, but that’s only for a very short window of time. 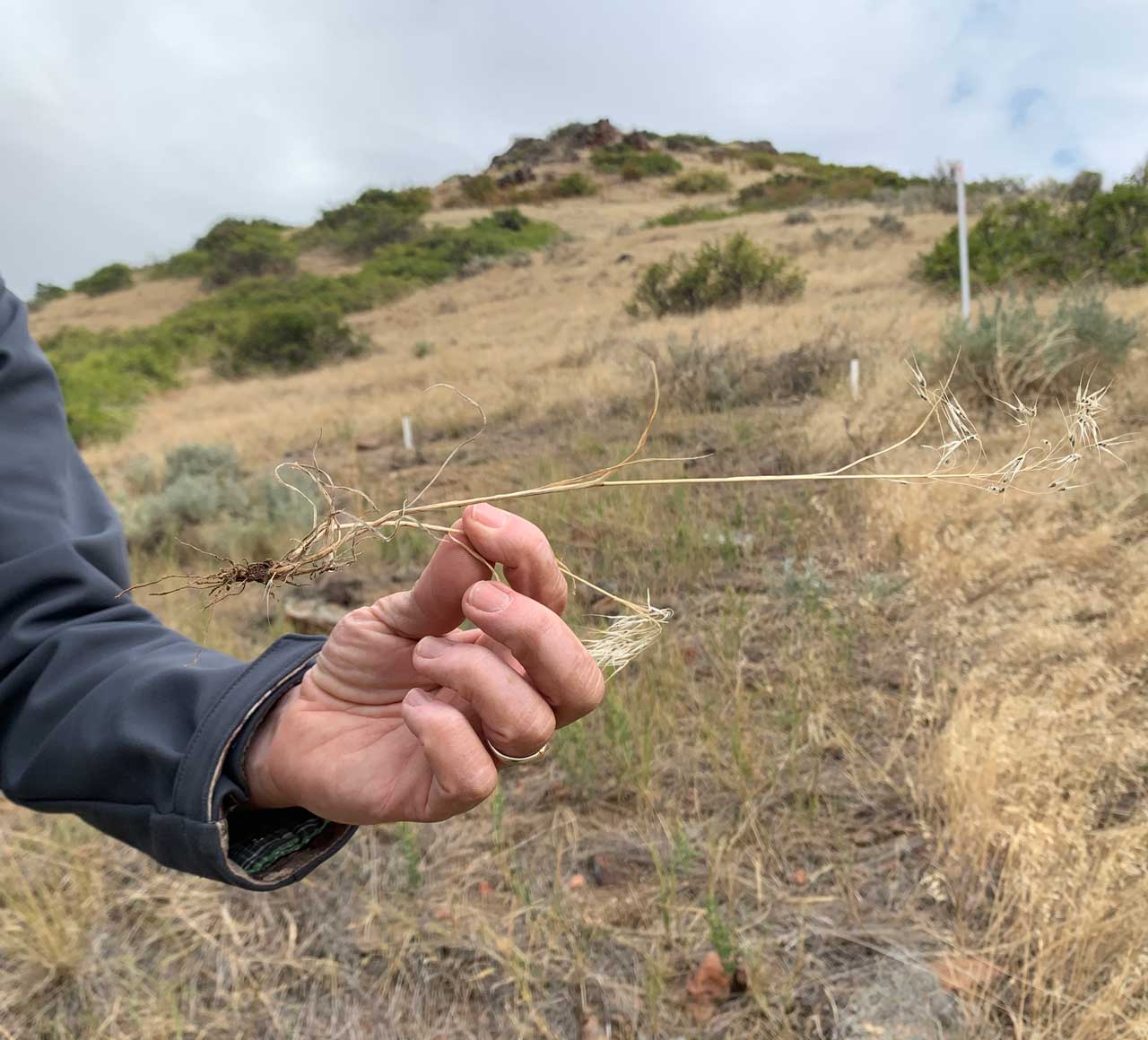 Brian Mealor holds up a sprig of cheatgrass growing on his property in Sheridan County, Wyoming.
Catherine Wheeler/Wyoming Public Radio

Beyond its effects on potential grazing on the land, invasive species can also drive large-scale ecological changes. These invasive weeds have adapted to grow quickly, spread their seeds and die. And when they die, their leftover stems and leaves become a very large fuel source for rangeland wildfires.

“They create these really thick patches that are then able then to catch fire and cause more problems by creating these large fires that wouldn’t happen because we typically have what we call interspace in those plants so that the fires don’t spread all that well,” Tekiela said.

Attention around wildfires tends to surround forests. And while losing trees and concerns about public safety are really important, Tekiela said there are equal concerns about rangeland, too. A 2015 issue of Fire Management Today from the U.S. Forest Service called it “the other kind of wildfire.”

“We have the exact same issues in rangeland, they just aren’t as flashy in that they don’t create as much smoke. There isn’t as much biomass to burn. However, in terms of acreage, on average we actually see more acreage of rangeland burning than we do of forest,” he said.

Not only do invasive species provide more fuel for wildfires, but they are also outcompeting native plants after the flames die down, Mealor said.

“There are big swaths of southern Idaho along the Snake River plain that historically may have burned every 50 to 100 years, depending on what kind of research you read, that now burn every three to five years because of cheatgrass invasion,” he said.

Mealor said the shorter times between fires are lowering the fire return interval. That makes it harder for sagebrush, and other native plants, to regrow from its seedling and compete with the invasive species.

“So in areas like that, you convert what was a good sagebrush grassland community, that benefits all kinds of wildlife, to an annual grassland with reduced diversity and reduced functionality,” he said.

Sagebrush isn’t a dominant species in northeast Wyoming, where Mealor’s research is taking place, but that’s why he said it’s even more important to protect what exists now, since re-establishing sagebrush in this environment will be difficult.

The increased drought across the West is not helping. These invasive plants can grow back much quicker than the native species after a fire and they can grow with very little water, and that just creates a cycle of problems, Tekiela said.

“The drought is further worsening these issues of both the fire and the invasion. So if you imagine it's kind of this positive feedback loop that's feeding in on itself and making a worse and worse situation each time you have an additional fire,” he said.

And not only do the invasive plants have an effect and are affected by drought, Mealor said they also act as a form of drought for native plants, by outcompeting them for scarce water supplies.

Densely populated grasses emerge in the fall and slowly grow roots when it’s just above freezing. Then when snow melts, the invasive plants, with their more shallow root systems than the native plants, suck up all the snowmelt, before it reaches the native plants’ roots.

“When you have a whole bunch of cheatgrass, ventenata, and medusa head, they actively grow really early during the growing season and they deplete that shallow soil moisture in many cases before our perennial plants can start to use it. 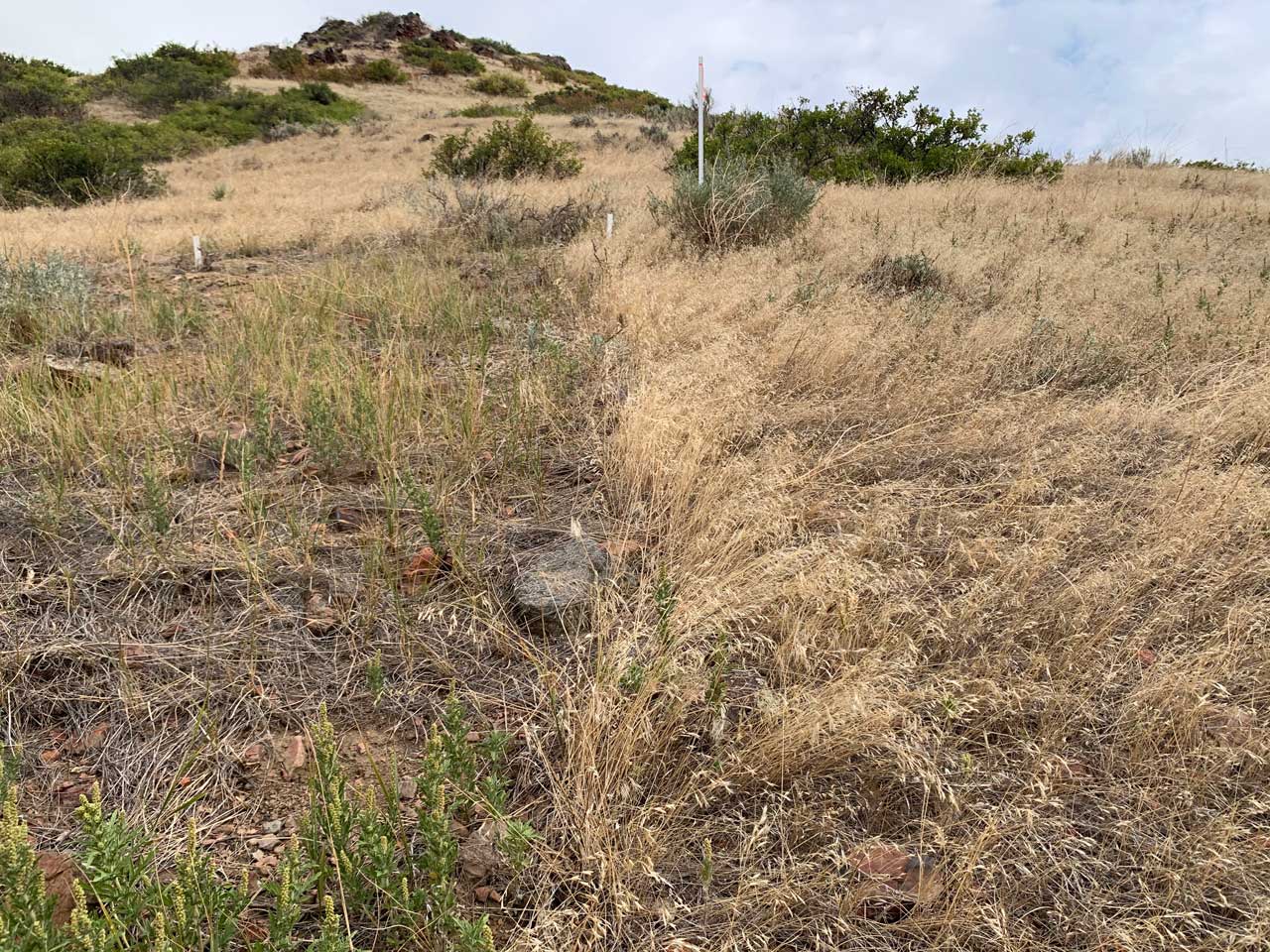 On the left, Brian Mealor has sprayed an herbicide to kill invasive species. Native species like the green Western Wheatgrass are now springing up. On the right, nothing was spray and cheatgrass has taken over the landscape.
Catherine Wheeler/Wyoming Public Radio

So, how are Mealor and other researchers trying to fix all this? Back on the hillside in Sheridan County, he pointed out about 18 different plots. They were sprayed with a herbicide in different amounts at different times of year.

“You can see exactly where I sprayed and where I didn’t. It’s not like there’s this sort of vague line. It’s like you came up here and erased it,” he said.

In some plots, everything is dead. Some plots still have plenty of brown and green villains. But in others, bright green western wheatgrass is springing up from the ground and the invasive plants are dead. Mealor said that’s the goal with these spraying experiments.

“You see the upper plots above us?” Mealor said. “That’s pretty gray. And there’s some green broad leaf and some weedy plants that are up there? And you see the good, green perennial grasses just kind of stop right when you get to that line. That’s not what we want.”

Using herbicides on cheatgrass isn’t a new management tool, Mealor said. But with new chemicals on the market, it’s changing how these plants can be controlled.

“I would be happy to not use herbicides, but a lot of the other tools we’ve tried, grazing all these other things, just don’t work that well. Maybe we just haven’t figured out how to use them well yet,” he said.

It’s also a very small amount compared to the size of the area, with the highest rate sitting at about five ounces per acre, he said.

“We’re not putting much chemical out into the environment, and we’re having really neat effects like this,” he said.

His approach to combating the invasive species is focused on timing.

Mealor said that way, they are able to target the invasive plants while letting the native species thrive. What’s changed in recent years is the chemistry and types of herbicides available.

“We’ve got a bunch of annual grasses, but there’s still a bunch of good guys that are in there as well. So if we can just reduce the pressure from the annual grasses and we see a really good recovery from those perennial plants,” he said.

One example of local groups working on these same issues is the Teton County Weed and Pest District in western Wyoming.

“In 2012, actually, we realized that cheatgrass in Teton County was really starting to expand from the areas that we had previously seen it. And we put a project in place where we were treating the cheatgrass,” said Mark Daluge, the district’s assistant supervisor.

After trying some methods that didn’t quite pan out, Daluge said they switched to the herbicide that Mealor is experimenting with, and now, they are in the process of comparing the efficacy.

“We won't see the results until next growing season. But we expect to see that the herbicide does what we think it's going to do and will prohibit those cheatgrass from growing dense stands again. And it'll allow the native species to come in and, and restore their vigor and their, their place in the ecosystem,” Daluge said.

That cheatgrass control isn’t just for the county’s ranchers and grazing livestock, but acts as a check on wildfire growth as well.

Mealor said these experiments and the results aren’t limited to Wyoming. There are other scientists working on the same issues across the West. The Western Governors Association has an invasive species working group where agencies can discuss how these experiments are working in states with different conditions.

“As we cooperate with one another and with industry and with landowners and agencies and we see a pattern like that that is very consistent across Wyoming, Colorado, Montana, Utah, Idaho, wherever else, then it really increases our confidence that we can make recommendations to landowners that will work for them and that we really understand the tool that we’re using so we can get the most positive benefit,” Mealor said.

Mealor said as they start to see consistent results they can start making recommendations to land owners and managers, and it means researchers are steps closer to understanding how to take the bad guys out for good.

This story is part of a series looking at where water and wildfire intersect in the West, produced by KUNC, KJZZ, KHOL, Aspen Public Radio, Wyoming Public Radio, and supported by a grant from the Walton Family Foundation.

2020 delivers setbacks for some long-planned Western water projects Pima County top health official warns of 'sobering weeks ahead' with pandemic State officials discourage holiday gatherings for people in assisted living facilities
By posting comments, you agree to our
AZPM encourages comments, but comments that contain profanity, unrelated information, threats, libel, defamatory statements, obscenities, pornography or that violate the law are not allowed. Comments that promote commercial products or services are not allowed. Comments in violation of this policy will be removed. Continued posting of comments that violate this policy will result in the commenter being banned from the site.