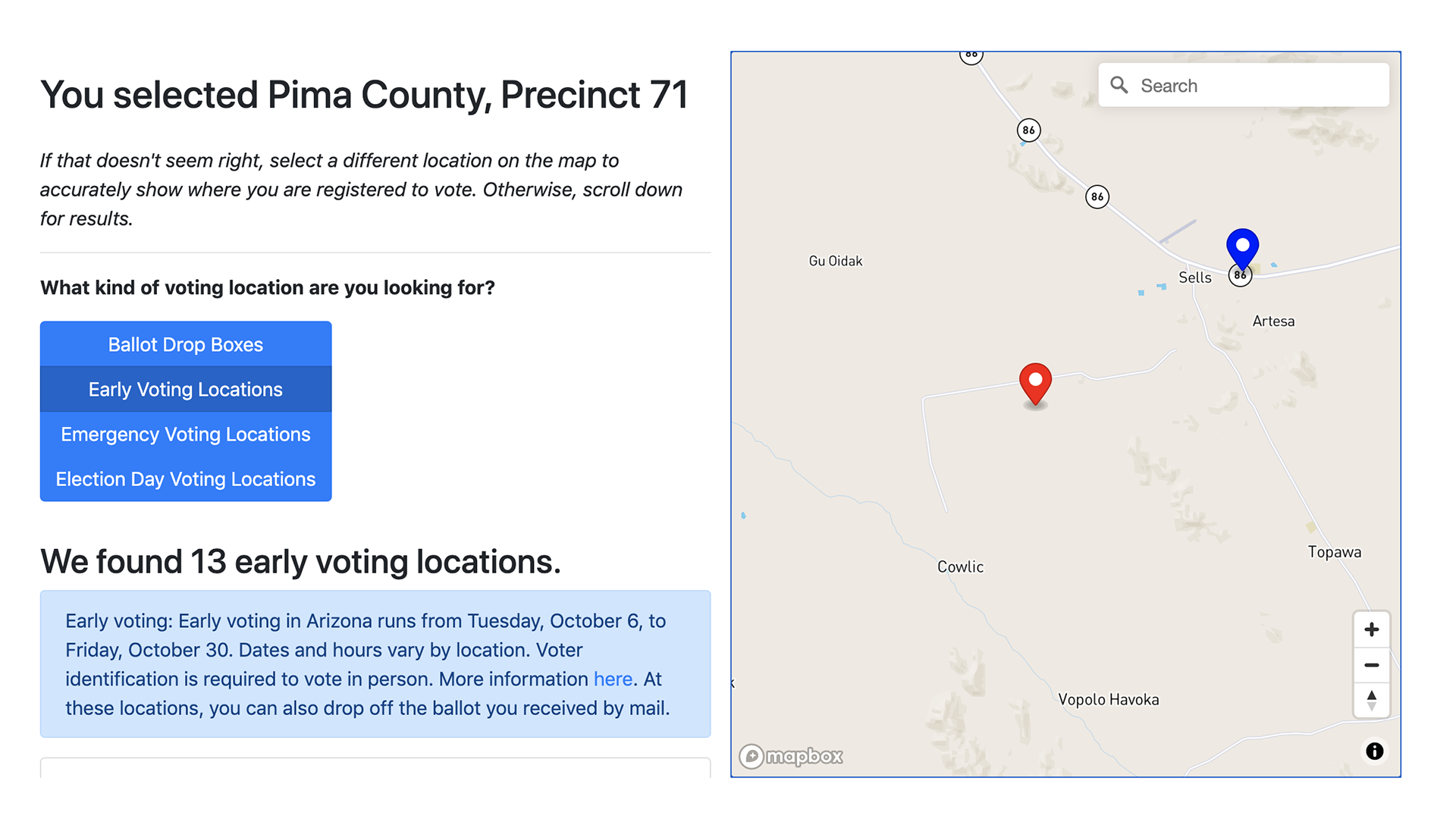 By dropping a pin on the map, anyone can identify that location's county and precinct. The poll locator tool also displays the locations of ballot drop boxes, early voting and emergency voting sites in the county, and it shows a voter their polling place on Election Day.

Torey Dolan, a Native Vote fellow with the Indian Legal Clinic, said there are 20 reservations in Arizona and that half of those cover multiple counties, which can lead to confusion when it comes to casting ballots.

"In Arizona, if you live in a precinct-based county and you vote out of precinct, your entire ballot is discarded," said Dolan, who is also a citizen of the Choctaw Nation in Oklahoma.

She said precinct-based counties allow people voting in-person to vote in only one location on Election Day, whereas vote centers allow everyone in the county to vote at any location in the county.

According to the case The Democratic National Committee v. Katie Hobbs, 1 in every 100 Native American voters in Arizona casts a ballot out of their precinct — that number decreases for nonminority voters to 1 in every 200 voters.

"When you have multiple counties on a single reservation, that means one community is subject to a lot of different standards, which can be very confusing," said Dolan.

For example, the Navajo Nation covers three Arizona counties. Dolan said Navajo County has a vote center model, Apache County is precinct based, and Coconino County is a hybrid of the two.

Since there is a lack of internet access in tribal lands, the team opted for the pin-drop method instead of geolocation so voters could connect to the internet away from their home and still identify the correct information to vote.

Dolan said that when she had the idea for this map, there wasn't a tool for voters to use to find their polling locations, if they didn't have a traditional address. Some people register to vote with short descriptions of their home's location, with a longitude and latitude, or with a Plus Code, and it's also possible that a county will assign a rural voter an address that fits in the database.

The poll locators for the Secretary of State's Office and Pima County Recorder's Office requires voters to input their street address before it will bring up voter information, like their polling location, precinct and other applicable district information.

This creates a barrier for residents in tribal lands, since street addresses aren't common. Patty Ferguson-Bohnee, the director of the Indian Legal Clinic, wrote in an article to Human Rights Magazine that approximately 18% of Native Americans who live in tribal lands across Arizona, but outside of Maricopa and Pima counties, have a street address and get their mail delivered to their door.

Dolan said the idea for this tool came out of a Google Map of polling locations in tribal lands she made as the lead student attorney in 2018 to advise people who called in to the Native Vote hotline (888-777-3831). She said what that map couldn't do was identify the precinct boundaries, so the clinic applied for a grant to create this updated version.

"I really hope [this tool] challenges developers and the state on how they make this information available," said Dolan. "Country recorders and the Secretary of State's Office are well aware of the nonstandardized address issue, but there hasn't been a lot of innovation in terms of how to create a publicly available tool that tells the voter their assigned location."

Dolan said since counties are still changing voting locations or the hours those locations may be open, she urged voters to verify the information from the tool with their county recorder.

Parties getting out the vote in Maricopa County Arizona elections chief on preparedness at the polls Arizona AG says there is no evidence of widespread voting by deceased voters
By posting comments, you agree to our
AZPM encourages comments, but comments that contain profanity, unrelated information, threats, libel, defamatory statements, obscenities, pornography or that violate the law are not allowed. Comments that promote commercial products or services are not allowed. Comments in violation of this policy will be removed. Continued posting of comments that violate this policy will result in the commenter being banned from the site.