Has one of the most famous instruments in rock & roll history been re-discovered almost 47 years after its controversial debut at the Newport Folk Festival? by Mark McLemore TWEET SHARE 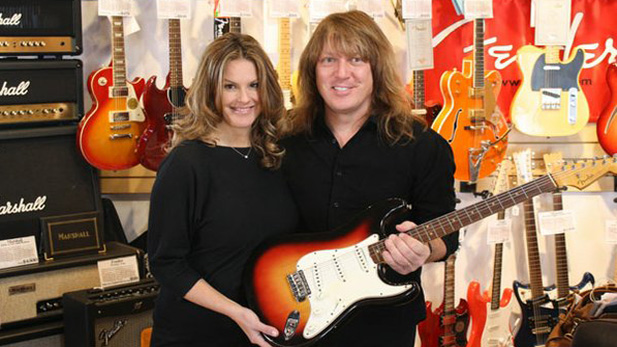 In July of 2012, the PBS TV series The History Detectives kicked off its tenth season with a show dedicated to exploring the story behind some artifacts from the world of rock & roll, among them a Fender Stratocaster guitar that may - or may not - have had a rather infamous past.

Was it a guitar that once belonged to Bob Dylan, and was it in fact the same instrument that Dylan had shocked and electrified the folk world with, back in the summer of 1965?

After an exhaustive series of tests, the guitar was declared genuine, and became the most valuable find in The History Detectives' own history. But, the identification has since been disputed by Bob Dylan himself.

To find out more, Mark McLemore talks with Jeff Gold, the owner of Recordmecca, a place in Los Angeles that buys and sells some of the most expensive rock and roll memorabilia in the world. Jeff has also written about the Newport guitar story on his blog, but here he tells Mark how he became involved in the search for Bob Dylan's most infamous guitar...

You can watch the video here. The History Detectives airs every Tuesday at 8 pm on PBS-HD Channel 6.

David Bromberg Returns to Southern Arizona DUSTWUN - A film about life, death & trust on the U.S. / Mexico border. "At the Center of All Beauty": author Fenton Johnson on the connection between solitude and creativity
By posting comments, you agree to our
AZPM encourages comments, but comments that contain profanity, unrelated information, threats, libel, defamatory statements, obscenities, pornography or that violate the law are not allowed. Comments that promote commercial products or services are not allowed. Comments in violation of this policy will be removed. Continued posting of comments that violate this policy will result in the commenter being banned from the site.