For more than three decades, neuroscientist John Hildebrand has worked with some of the world’s smallest brains—the brains of insects.

“The first response I get to that is ‘insects have brains?’” says Hildebrand. “Yes, they have brains. So I like to tell people that the next time they swat an insect, they should remember that’s somebody’s daughter or son and it had a brain.”

Hildebrand, a University of Arizona regents professor, studies these daughters and sons to explore the sense of smell and how it affects insect behavior.

He came to this peculiar interest by chance. As a graduate student, he considered careers in chemistry, biology and even music before a single encounter led him in a new direction.

He found a book called Nerve Cells and Insect Behavior resting on a library bookshelf; it had a praying mantis—an insect that had fascinated him since childhood—on its cover. He read the whole book in one sitting.

“When I put it back on the shelf, I heard a little voice in my head say, ‘That’s the thing you really want to do,’” he recalls. 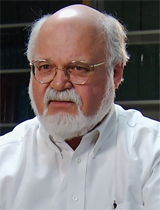 John Hildebrand, a University of Arizona professor of neuroscience, has spent decades studying the link between insects' sense of smell and their behavior.

Hildebrand has stuck with insects and their behavior ever since. When he began to head his own lab, Hildebrand chose to study Manduca sexta, commonly known as the tobacco hornworm.

It’s a giant moth that can reach a wingspan of more than four inches as an adult. Its oversized body holds an oversized brain, and that makes it easy to study its nervous system.

He focused on M. sexta’s sense of smell, and for good reason, says researcher Rob Mitchell, a member of Hildebrand’s team.

“Insects use their sense of smell to find food, to find places to lay eggs, even to know who’s a male and who’s a female,” Mitchell says.

When insects use their sense of smell to find food, it can spell trouble for humans.

Food-seeking insects can threaten crops or even—as in the case of mosquitoes—spread disease.

Understanding how insect brains handle the business of smelling could give humans a new tool for keeping pests at bay, says Mitchell.

“If we can identify what chemicals are released by crops and important food plants that the insects are cuing in on, then we can try to modify those chemicals or change the blend in the area so the insects will be less interested,” he says.

Every scent is a mix of different chemicals, and Hildebrand’s team is trying to cue in on which chemicals trigger the strongest insect response.

One way they try to answer this question is by literally reading the moth’s mind. The researchers connect channels to a moth’s brain that can read electrical signals coming from the brain cells. Then they expose the moth to different scents and monitor how the brain cells respond.

The result is a map of how the moth’s brain processes smells.

That isn’t just good for understanding and potentially altering insect behavior. It helps scientists understand the human sense of smell too.

There’s still a lot scientists don’t know about how we recognize smells—how we know, for example, that a glass of red wine isn’t a cup of coffee, even if some of the chemical components are the same.

“They came to me and said they were interested in Manduca because it’s a big insect and might be able to carry something while flying and maybe could be coopted to gather information for the military as a reconnaissance agent,” Hildebrand says.

It’s just one more potential gift from what Hildebrand calls his “second-favorite creature”—a bug with a big brain and many still-unsolved mysteries.

Mosquitoes May Stay Until November Buzz on Bees: They Communicate Bugs Tell Story of Fire and Stream
By posting comments, you agree to our
AZPM encourages comments, but comments that contain profanity, unrelated information, threats, libel, defamatory statements, obscenities, pornography or that violate the law are not allowed. Comments that promote commercial products or services are not allowed. Comments in violation of this policy will be removed. Continued posting of comments that violate this policy will result in the commenter being banned from the site.