First in a series:

Palm trees scattered throughout fields of greens and around a three-acre pond. Ducks lounged in packs near the water. Occasionally, one or two of them split from the group to cruise in the pond.

Monsoon storms came and went this season, making the air dense with moisture. The palm trees standing tall made the area seem more like a Florida swamp than a dry desert.

Lizards raced through the dirt. Their trails led to rows of mesquite trees and blooming cacti, a scenery more familiar to the Tucson desert.

The Roy P. Drachman Agua Caliente Regional Park is an oasis sitting in the middle of urban northeast Tucson. It is where desert meets a swamp environment. However, the swamp part has been fading away lately.

The once-full pond now reveals mudflats. The corners out of reach from the deeper end of the pond are vulnerable to severe drought conditions. Those areas showed cracks, and the plants that once lived there dried out.

The park once had a natural spring that supplied the main pond robustly, and sometimes overflowed it to the point that pumps were installed to carry water from it over to other ponds in the property. In the past, the area around the spring would have up to seven ponds. When Pima County acquired the property in 1984, there were three, including the main pond.

“(The water has) been declining since around the 2000s to the point now that we’ve had no spring flow at Agua Caliente over...the last year and a half,” Baldwin said.

“In July 2012, we went flat line,” Baldwin said. “That’s when we started not seeing any flow out of the spring, off and on.” 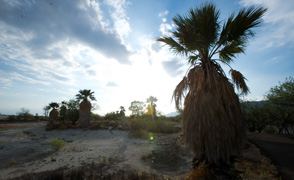 Where pond two used to be is currently completely dry.
Yoohyun Jung

Baldwin said nowadays there is no spring flow. Where it once was abundant, now became a long patch of mud and dry cracks.

“...that has brought us to the point now where, to maintain the pond, we’re putting in over 55,000 gallons of water a day into the system,” Baldwin said.

He said the daily limit for pumping groundwater to supplement the main pond is 65,000 gallons. The main pond can be “stabilized” at about 30 inches below the maximum depth with that much water during the summer seasons. However, with increasing temperatures and with the bottom of the pond silting in over the years, the system has been proving to be difficult to sustain.

Extended Drought in the Southwest Puts Stress on the Environment

“The aquifer is not being recharged at the same rate as it was 10 years ago," Baldwin said. "(Back then), there was a lot more water in the system (located) in the mountains (because) there was more rainfall."

Gregg Garfin, an assistant professor at the UA's School of Natural Resources and the Environment, and researcher at the UA's Climate Assessment for the Southwest, said until the late 1990s, the Southwest region was going through a wet period because of a climate phenomenon known as El Niño Southern Oscillation. This climate phenomenon is a multi-decade variability that causes a “see-saw” in surface temperature and air pressure, Garfin explained.

In 1998, he said the region flipped to the other side of this phenomenon.

“We went to the other phase of this kind of multi-decade variability, and we’ve been in drought condition since then,” Garfin said. “We’ve had a couple of summer flood events, (such as) in 2006, but by and large, we had below average precipitation.” 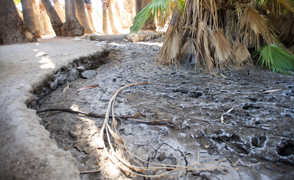 A natural spring used to flow through the path to supply the ponds.
Yoohyun Jung

The combination of La Niña episodes and global warming creates an environment for hotter droughts, he said. During hotter droughts there is more evaporation, putting more stress on plants.

The plants that heavily populate Agua Caliente, such as cattails and palm trees, are known to be water-dependent vegetation. They transpire water from the ground, adding to the already existing surface evaporation.

The Friends of Agua Caliente Park, a group aiming to preserve the historic site, argued that the county should reduce the amount of such vegetation around the park to alleviate some of the drought conditions.

“You don’t have any water naturally coming into the pond,” said Jim Knoll, president of the group. “...(the presence of cattails) would tell me that there’s going to be a lot of usage out of the pond, more than just evaporation.”

The group drafted a letter to the county's natural resources, parks and recreation department expressing its recommendation to thin the cattails out just enough so that the management can “figure out what the stability is for the pond and find that balance to where you’ve got enough vegetation around to work for the wildlife, and the water flow and the people, but not so much that you’re going to kill the pond off.”

Baldwin responded that it is true cattails and palm trees contribute to evapotranspiration, a process where the ground loses water because of both surface evaporation and plants absorbing water. However, they are not the major source of water loss.

“If you look at the research around how much these particular plants give off and take out, it’s not very high, comparatively,” Baldwin said. “We’re not so concerned about them as a significant force.”

Baldwin also said cattails and palm trees are defining characteristics of the park that visitors know and love. So, the management has decided that cutting them out would be a “significant change that would not be desirable nor necessary for this particular location.”

Measures to Save the Pond

Pima County is considering many different options to be able to maintain the pond. Baldwin said one of the proposals being considered is downsizing and renovating the pond system itself.

“We could restructure it, dig it out deeper, where it’s silted in over the years and we could, most importantly, line the bottom and essentially seal the system in,” he said.

If the pond is renovated, Baldwin said the county will be able to pump much less water into the pond from the system, while still preserving cattails and palm trees.

Baldwin said that, from a management point of view, the county administration does not have the ability to do much.

“It goes back to getting a lot of (visits),” he said. “We get a lot of people that love the system and come out there.”

Knoll said the main pond is iconic to visitors and must be maintained, even at the cost of losing the other ponds.

AZ is 'Bull's Eye of Climate Change' Program Brings K-12 Children to Mt. Lemmon for Science Learning Abundance of Wildlife, Nature in Heart of Desert
By posting comments, you agree to our
AZPM encourages comments, but comments that contain profanity, unrelated information, threats, libel, defamatory statements, obscenities, pornography or that violate the law are not allowed. Comments that promote commercial products or services are not allowed. Comments in violation of this policy will be removed. Continued posting of comments that violate this policy will result in the commenter being banned from the site.