Skye is living without a permanent home, but rejects the word “homeless.”

“I’m just a fellow human being, but I can tell you when I was younger in Chicago, that word didn’t exist. It was put on us, and the people I know don’t use that word for themselves, we’re just people,” Skye said. 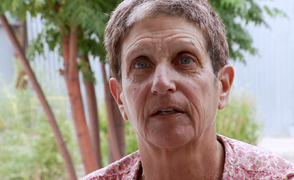 Skye sits in the backyard of the Sister José Women's Shelter.
AZPM Staff

If 'homeful' were a word, the Sister José Women’s Shelter might be described that way.

Volunteers bustle through the space, preparing food and drinks, cleaning the house, and serving the women who arrive each day. There are bathrooms where women can take 20-minute showers. In August, they counted 62 women and 277 showers.

There are two washing machines where they can do their laundry and a clothesline in the backyard, as well as an organic vegetable garden, and places to sit, read and watch TV. The volunteers serve coffee, juice, fruit and vitamins in the morning, and a meal or sack lunch at midday.

Listen to this story as featured on Arizona Spotlight: 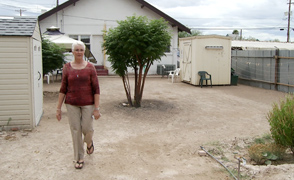 “When Jean got this house, she wanted to give us something that most of us don’t have, which is a really beautiful place...a home," Skye said. "They’ve created every kind of service they can think of that women need."

“Jean” refers to Jean Fedigan, the shelter's executive director. She interacted with women in need while volunteering with a soup patrol on a winter night four years ago, and knew she had to offer more help.

The first few winters, Fedigan and a posse of volunteers offered emergency night shelter to homeless women in the sanctuary of a local church. In the fall of 2012, they were able to rent a house on 18th Street and Stone Avenue, south of downtown Tucson. This area of town is now being referred to by some in social services as the "homeless corridor."

Fedigan, who also serves as the chief nursing officer at the University of Arizona Medical Center, named the shelter after Sister José Hobday. Hobday was an elder of the Seneca Tribe, a Franciscan nun and a self-described missionary-at-large, who spent much of her life serving the poor. She and Fedigan were friends. And, as her nurse, Fedigan cared for her until the time of her death. 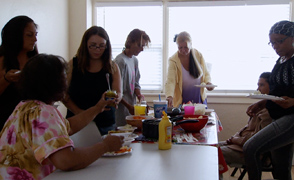 Women at the shelter share a meal.
AZPM Staff

“She taught a lot of us about caring for the poor, and about giving them dignity and respect," Fedigan said. "...we all just feel her spirit and protection, and believe that she cheers us on."

Denise Milne is responsible for the shelter’s daily operations. She lives in the house and her bedroom doubles as an office.

“In Tucson, there are more shelters for homeless men than there are for homeless women and there are men who are able to go from shelter to shelter, month by month, year by year, and never end up camping on the street, because they have that many resources available to them," she said.

"These women, the most they’ll get, if they can get into one of the three other programs other than ours, they’ll get about seven nights a month at the Salvation Army and if they can’t get into another program, then they’re back on the street until they can get back into the Sally a month later. There are not enough beds for homeless single women without children.” 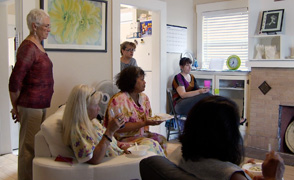 Fedigan and some of the women watch TV.
AZPM Staff

Milne said the shelter is trying to fill that gap.

Places that do serve homeless women are often only open to them at night, but leave them with nowhere to go when morning comes.

“It may be some historical reason of ‘put jobless people out on the street and they’ll go get a job’ and that’s not how it works," Milne said. "They need more support when they’re out there during the day."

Patricia Carillo lost her job and her apartment, now she lives out her car.

“I have to sleep with the windows up because of the bugs that come to bite you and of course, someone coming to bother you … sometimes I do sleep, but it’s not easy. That’s why I wish I had a roof over my head and a bed to sleep on,” Carillo said.

The 1,200-square-foot home has a limited capacity, but Milne said they are currently looking for a larger property.

There was a time when Skye had a home to call her own, now she imagines how she’d like her home to be. 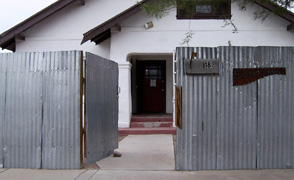 “It means a safe place where I can let me guard down, where there’s an interior space and an outside space that I can be myself and not feel threatened or anything invasive going on, but I don’t know if I’ll ever have that again … I’m not sure,” Skye said.

Fedigan said she wants the shelter to continue to be a place where women can come, and receive help and support.

The Sister Jose Women’s Shelter is currently operating a daytime program on Tuesdays through Saturdays, from 9 a.m. to 2 p.m. On Friday, Nov. 29, they will kick off their winter shelter, with 12 beds available for overnight stays.

Homeless Families in Need of Shelter on Cold Nights METRO WEEK: 'Tucson Can Do More to Help Homeless Population' Border Clinic Providing Free Care for More Than 40 Years
By posting comments, you agree to our
AZPM encourages comments, but comments that contain profanity, unrelated information, threats, libel, defamatory statements, obscenities, pornography or that violate the law are not allowed. Comments that promote commercial products or services are not allowed. Comments in violation of this policy will be removed. Continued posting of comments that violate this policy will result in the commenter being banned from the site.