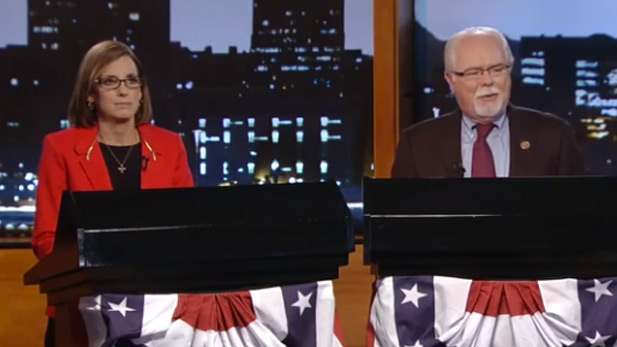 Ron Barber and Martha McSally may find out Monday which of them will represent Arizona's 2nd Congressional District in the next Congress.

Outcome of the too-close-to-call race will hinge on two factors: Pima County completing its count of early, duplicate and provisional ballots; whether the Republican McSally pursues a legal challenge that her lawyer brought up Sunday.

The count, including several hundred votes posted Sunday, showed McSally with a 341-vote lead, or 0.16 percent. Pima County officials said 9,335 provisional ballots were found valid and all were to be in the hands of election tabulators by Monday morning. It was unknown how many of those ballots were cast in the 2nd Congressional District.

An unknown but likely much smaller number of ballots in Cochise County remained to be counted.

Pima County officials processed provisional ballots all weekend and said they found 767 invalid for a variety of reasons, including voters trying to cast their ballots at the wrong polling places.

A legal challenge to the vote processing was begun Monday by McSally lawyer Eric Spencer. Spencer sent an email Sunday morning to Pima County Recorder F. Ann Rodriguez and Elections Director Brad Nelson requesting that they stop verifying provisional ballots that are missing an election official's signature on the ballot form and that those ballots not be counted.

The county declined, in a response sent by Chris Roads, county registrar of voters. Roads told Spencer that the processing of ballots will continue because it "has no bearing as to your challenge," and will not prevent the challenge from proceeding.

The Democratic incumbent Barber's campaign was quick to criticize the McSally move, saying it was one of her "tricks" to disenfranchise voters. A Barber spokeswoman said in an email Sunday to the news media that it was a reminder of McSally's 2012 unsuccessful move to challenge ballots in Cochise County.

TucsonSentinel.com reported Sunday that the new challenge affects an undetermined number of provisional ballots cast in five CD2 precincts that voted for President Barack Obama in 2012.

Both sides have made calls for campaign contributions to help cover costs of a recount, with Barber's going out Thursday and the Republican National Campaign Committee sending one on McSally's behalf Friday.

A recount would be paid for with public money, although the campaigns would have expenses for lawyers and others involved in observing the process.

A congressional race in Arizona is subject to recount if the margin is fewer than 200 votes.

Arizona Supreme Court says Gosar, Finchem, Biggs can stay on ballot Arizona Supreme Court throws out ballot measure aimed at repealing flat tax Ducey signs bills limiting school mask, vaccination rules
By posting comments, you agree to our
AZPM encourages comments, but comments that contain profanity, unrelated information, threats, libel, defamatory statements, obscenities, pornography or that violate the law are not allowed. Comments that promote commercial products or services are not allowed. Comments in violation of this policy will be removed. Continued posting of comments that violate this policy will result in the commenter being banned from the site.