How did girl come to play with roach? Only after building her nerve by holding tarantula. by Vanessa Barchfield Tweet 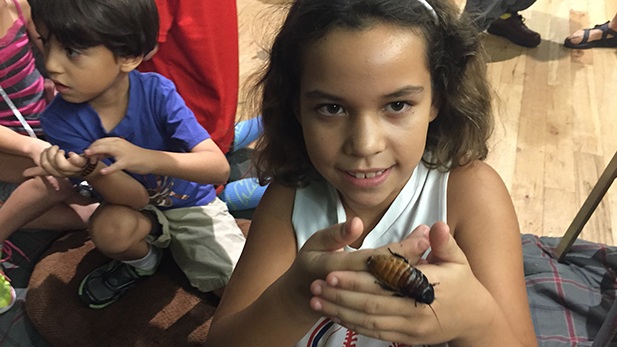 Maija Hildebrand says holding a tarantula helped her overcome her fear of picking up a cockroach.
Vanessa Barchfield, AZPM

The Montessori School House student said she had been a little scared of some insects and arachnids before coming to the Arizona Insect Festival at the University of Arizona Sunday. She was among the thousands at the annual festival.

"I only got the nerve to hold the cockroach after I held the tarantula," Maija said.

After holding a tarantula and before hanging out with the cockroach - his name is "Robert, and that's my dad's name" - Maija stopped by the edible insect stand.

"I covered up the worms with sauce, and I flipped over the cookie so I couldn’t see it, and I just popped it in my mouth and chewed it up," she said.

Most of the kids at the festival showed courage similar to Maija's, excited to get a chance to hold caterpillars or see bees at work in their honey combs.

Back at the roach display, volunteer Galen Dudenkauf said the point of the festival was to normalize human relationships with insects.

"Cockroaches are really cuddly really," Dudenkauf said. "They just have a bad rap because they hang out in dark places and they move quickly, but you know they were here for so much longer than us."

Maija said she was not sure if she will cuddle the next cockroach she sees, but one thing is certain: After Sunday, she won’t be frightened of it.

Insect Experts Report Active Season of Africanized Honeybees in Arizona Insect Forces Expanded Arizona Citrus Quarantine New Insect-Based Protein Bar Promotes Water Sustainability
By posting comments, you agree to our
AZPM encourages comments, but comments that contain profanity, unrelated information, threats, libel, defamatory statements, obscenities, pornography or that violate the law are not allowed. Comments that promote commercial products or services are not allowed. Comments in violation of this policy will be removed. Continued posting of comments that violate this policy will result in the commenter being banned from the site.