Feb 15 lecture set at UA for justice appointed to court in 2010 by Obama. Tweet 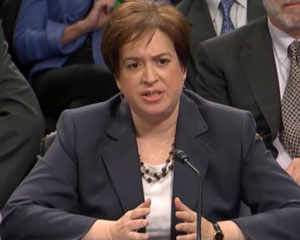 This story has been updated to reflect that registration for Justice Kagan's speech is currently available only for law students, faculty and staff.

U.S. Supreme Court Justice Elena Kagan will speak at the University of Arizona next month.

Kagan will deliver the annual McCormick Lecture for the James E. Rogers College of Law the evening of Feb. 15. The lecture will be in the UA School of Music's Crowder Hall, which seats more than 500.

Kagan was nominated to the court in 2010 by President Barack Obama after serving as U.S. solicitor general, the job of representing the federal government's executive branch in the judicial system. She previously was dean of Harvard Law School and an associate counsel to President Bill Clinton and then deputy assistant to the president for domestic policy.

Priority seating for the lecture will go to law students, faculty and staff.

Supreme Court Justice Kagan Reschedules Tucson Visit AZ WEEK: Supreme Court Rulings' Impact on Arizona Arizona Independent Redistricting System Upheld
By posting comments, you agree to our
AZPM encourages comments, but comments that contain profanity, unrelated information, threats, libel, defamatory statements, obscenities, pornography or that violate the law are not allowed. Comments that promote commercial products or services are not allowed. Comments in violation of this policy will be removed. Continued posting of comments that violate this policy will result in the commenter being banned from the site.