× CORONAVIRUS: The latest coverage and local resources regarding COVID-19 from the Arizona Public Media newsroom.
/ Modified may 11, 2016 5:40 p.m. 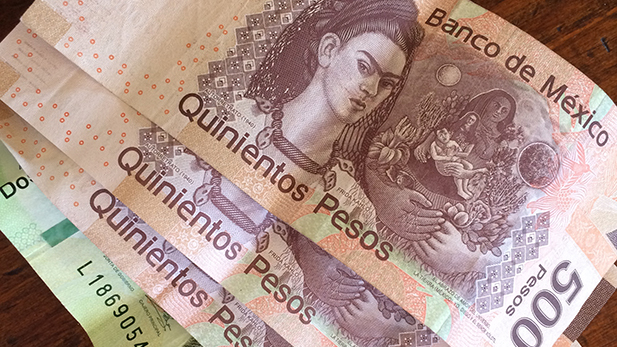 The value of Mexico's peso continues to linger at a historic lows despite the country's current economic health, making life tough for the average worker.

Thanks to a series of financial and energy reforms, Mexico's economy has grown 2.7 percent in the first quarter of this year. That's more than expected, said Jesus Cañas, an economist for the Federal Reserve Bank of Dallas.

"Inflation is low, employment is growing," Cañas said. "So it looks like this exchange rate a result of…what is going on in the rest of the world."

Expectations for global economic growth are low partially due to tumbling oil prices. That makes investors pull out of countries like Mexico, where government revenue is largely dependent on oil.

Georgina Gutierrez is a city councilwoman in Ojo Caliente, a small town in central Mexico. She was in downtown El Paso on Tuesday to catch an evening bus to Santa Fe.

"I wanted to surprise my sons with a visit for Mother's Day," she said.

The high exchange rate, roughly 18 pesos to the dollar now, means she had to take out a $300 loan to be able to afford the trip.

"It'll likely take me a year and a half to pay it off," she said.

Mexican Peso Rallies After US Presidential Debate Arizona Border Sheriffs Say No to Governor's Drug Strike Force Town Hall: Better Roads Would Strengthen Trade with Mexico
By posting comments, you agree to our
AZPM encourages comments, but comments that contain profanity, unrelated information, threats, libel, defamatory statements, obscenities, pornography or that violate the law are not allowed. Comments that promote commercial products or services are not allowed. Comments in violation of this policy will be removed. Continued posting of comments that violate this policy will result in the commenter being banned from the site.