Era of Solar Discovery on Kitt Peak Coming to an End 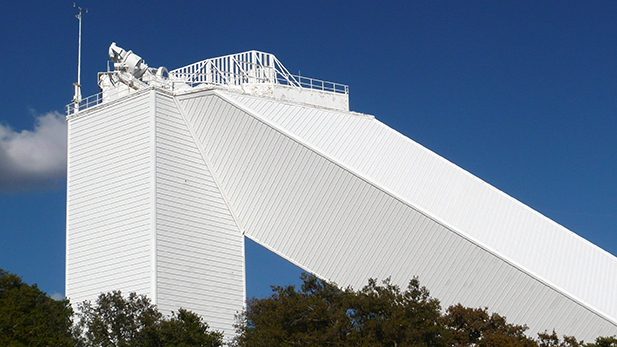 An era of discovery is coming to an end for the solar telescope atop Kitt Peak west of Tucson.

The National Solar Observatory has moved its headquarters to Boulder, Colorado, from Tucson. The organization will abandon its solar telescopes here and in New Mexico for a larger instrument in Hawaii.

The McMath-Pierce Solar Telescope has held the designation as the world’s largest collection of solar telescopes since it was dedicated in 1962. Its upside-down V shape is visible for miles atop the Kitt Peak National Observatory.

It will be replaced by the Daniel K. Inouye Solar Telescope on the Hawaiian island of Maui in 2019. The Solar Observatory is seeking another organization to take over operations at the Kitt Peak telescope after next year.

“The McMath instrument has a long history of discovery in solar physics particularly at infrared wavelengths,” said Matt Penn, assistant astronomer at the National Solar Observatory.

Penn said moving personnel from Tucson and Cloudcroft, New Mexico, will enable greater collaboration among his group and several other organizations engaged in solar research.

The Solar Observatory is building the larger telescope atop Halelakā mountain. Its primary mirror was built in Germany and polished last year at the Richard F. Caris Mirror Lab at the University of Arizona.

Penn says about 50,000 people visit the McMath-Pierce telescope each year. It’s the only instrument people can tour on Kitt Peak during the day. It will remain open to visitors until October 2017.

Tucson Astronomer to Lead Citizen Observations During Eclipse UA Scientists to Make 3-D Map of Universe for Dark Energy Clues Vail's Cienega High Students to Document 2017 Solar Eclipse
By posting comments, you agree to our
AZPM encourages comments, but comments that contain profanity, unrelated information, threats, libel, defamatory statements, obscenities, pornography or that violate the law are not allowed. Comments that promote commercial products or services are not allowed. Comments in violation of this policy will be removed. Continued posting of comments that violate this policy will result in the commenter being banned from the site.