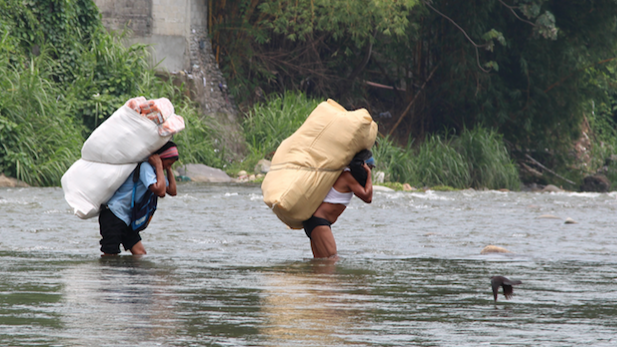 Guatemalans cross Rio Suchiate from their native country into Mexico on the first leg of what they hope is a journey to the U.S.
Lorne Matalon, Fronteras Desk

CIUDAD HIDALGO, Chiapas — In 2012, a senior official in the U.S. Department of Homeland Security declared that Mexico’s southern border with Guatemala was now essentially the southern border of the United States.

That was two years before the 2014 child migrant crisis that saw tens of thousands of unaccompanied children from Central America crossing or attempting to cross into the U.S. from Mexico.

Since then, the U.S. has expanded its own border enforcement efforts by assisting Mexico on its southern border. In 2015, fewer Central Americans reached the U.S., though the numbers undulate from season to season.

This border is porous even after the U.S. pressured Mexico to start Programa Frontera Sur, its southern border plan, in July 2014. The plan was crafted after President Barack Obama said the unprecedented numbers of unaccompanied children and families arriving at the U.S. border in the preceding months constituted an "urgent humanitarian situation."

The United Nations high commissioner for refugees later warned of a "looming humanitarian crisis in the Americas."

Starting in July 2014, Mexico sent at least 300 immigration agents from other parts of the country to the south, raided trains and migrant hostels and set up mobile checkpoints. Washington has supported the campaign with training, technology and intelligence.

For migrants, the consequences have been profound.

Nicaraguan migrant Brian Chacón was in the southern Mexican border town of Tapachula, Chiapas, at a food stall. When Chacón entered, he shuffled his feet, looked down at the ground and then looked up and started asking diners for spare change to continue his journey north.

"We are migrants from Nicaragua," he announced softly in Spanish, addressing about a dozen people. He said that he was headed to the United States in an attempt to join relatives in Los Angeles. He told diners that he started his journey in the Nicaraguan capital of Managua, then headed through El Salvador, working there as a laborer.

He claimed that he could not find work in Mexico because he had no documents. Other migrants said they found work as day laborers and would remain in Mexico until they could save enough to move on.

Outside the diner, Chacón said he feared he would be caught at any of many checkpoints— both fixed and mobile— strewn across southern Mexico. Some of the mobile checkpoints were paid for by the U.S.

"They [Mexican police and immigration agents] look for us because we are a trophy catch for them," he said in Spanish. "They're hunting us."

Deportations of Central Americans from Mexico rose by nearly 70 percent in the first 13 months of the southern border plan. Some believe that number comes at the expense of human rights.

"U.S. involvement in the southern border of Mexico is worrying precisely because of how hidden it is, not just in terms of what the U.S, is doing but what Mexican authorities are doing with U.S. support," said Clara Long with Human Rights Watch in San Francisco.

"We've documented many cases of children who have tried to seek humanitarian protection in Mexico, have been met with detention, a lack of a meaningful opportunity to make their claims and been sent back to Central America," Long said.

Neither government talks openly about the work in southern Mexico. Repeated attempts to speak officially with both the U.S. Department of Homeland Security and Mexico's National Migration Institute, known by its Spanish acronym as INAMI, led nowhere.

INAMI in Mexico City returned phone calls and emails, each time pledging to set up an interview, but ultimately to no avail. U.S. officials did not respond.

Adam Isacson, a security and border policy analyst at the Washington Office on Latin America, a leading research group focused on the Americas, said he knows why neither government wants to speak on the record.

"There’s sensitivity about anything that looks like the gringos coming down and telling them what to do," Isacson said. Others have suggested that Washington does not want to divulge details about a campaign that the host country has no desire to acknowledge publicly.

"It’s a Mexican plan that was certainly drawn up with a lot of U.S. influence when you had this flood of children coming in 2014," he said. "U.S. diplomats were very clear in their statements and their interactions with the Mexicans: 'Please help us do something about this.'"

Isacson's agency offered two examples of what he said is the U.S. perception about the state of affairs on the Mexican-Guatemala border after the summer of 2014.

In March 2015, Rep. Kay Granger, chairwoman of the State, Foreign Operations and Related Programs Subcommittee of the House Appropriations Committee, said in a budget hearing that, “Our neighbor Mexico is on the front lines of combating the illegal migration issue, and we must do all we can to help Mexico strengthen its borders.”

Asked that same month how he would spend an additional dollar, Adm. William Gortney, head of the U.S. military’s Northern Command, said, “I think my dollar would be better spent partnering with Mexico so we can help assist them to shore up their southern border so it’s less of a challenge up on our border.”

Washington has committed at least $100 million for Mexico’s southern border program since 2014. As of this February, $20 million had been delivered. And some who work that border are quite happy with the help they are receiving.

A Mexican immigration agent agreed to discuss the matter, but only if her identity was not revealed, fearing retribution from superiors. She claimed migrants receive better treatment than ever before under Mexico's southern border plan. She showed her credentials, was in uniform and arrived with a trusted go-between.

"I’ve seen U.S. Customs and Border Protection officers here," she said in Spanish. She said U.S. agents work regularly inside a border area migrant detention center known as Siglo 21, one of the largest such centers in Latin America.

"Our border is easy to cross," she said, citing the geography of the region - mountains, forests and the meandering Rio Suchiate that marks a large part of the Mexican-Guatemalan border.

"U.S. agents come to interview migrants we detain," she said. “They can identify people we’ve deported before and that's been crucial."

She explained that the U.S. is helping to collect data on migrants and migrant flows through improved fingerprinting techniques, among other initiatives. She also said that U.S. technology is more advanced than the tools currently at Mexico's disposal. "That has really helped INAMI," the agent said.

Yet that support coincides with mounting allegations against some of her colleagues. Mexico's human rights commission reported that complaints of extortion and violence by immigration agents rose by 52 percent in year one of Programa Frontera Sur.

Human rights worker Diego Lorente said he is one of the few people not in law enforcement allowed into the detention center. He said he also has seen U.S. personnel inside the center, including a recent encounter with a man whom Mexican agents identified as a member of the U.S. Embassy's staff.

"They are suffering much more now than they have in the last two or three years," he said.

If migrants do make it past the border and into the interior of the country, they must run an alphabet soup of Mexican law enforcement agencies including immigration, police and the army. Yet thousands of migrants appear undeterred.

Across the southern border region, groups are in shelters, buses and on the roads. Despite the dangers, Mexico remains a trampoline to the U.S.

Thousands of Children Seek Asylum, Many Without Lawyers Mexico Cracks Down on Northbound Central Americans New Surge of Central Americans Seen on Border
By posting comments, you agree to our
AZPM encourages comments, but comments that contain profanity, unrelated information, threats, libel, defamatory statements, obscenities, pornography or that violate the law are not allowed. Comments that promote commercial products or services are not allowed. Comments in violation of this policy will be removed. Continued posting of comments that violate this policy will result in the commenter being banned from the site.