Story of group in Ohio held for more than one year; wages taken by captors. TWEET SHARE 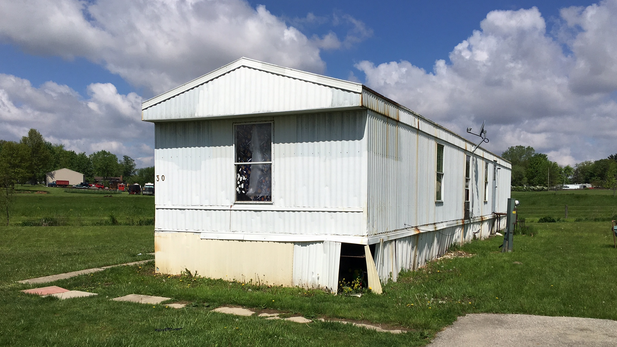 MARION, Ohio — In the last three years, tens of thousands of unaccompanied minors have fled Central America for the U.S.

At least 19 have wound up in the hands of labor traffickers, including 10 teenagers, some as young as 14, who labored as prisoners for more than a year in Ohio.

About an hour north of Columbus, past acres of rolling hills, farm houses and brown cows grazing in tall green grass, sits a trailer park.

Standing outside the dilapidated trailer brings back bad memories for one young man from Guatemala who lived there.

“It was really poor conditions, a lot of roaches, holes everywhere,” he said in Spanish. “It was just very bad.”

The teen, wearing a black baseball cap and Army T-shirt, pointed to a white trailer at the end of a gravel road.

He didn’t want to use his name because of the threats his captors made against him and his family. Although they are in prison, they have ties in Guatemala and the U.S.

He came to the U.S. with the promise of a good job and the chance to go to school when he was 17. What he got: 12 hours a day, six days a week of debeaking, vaccinating and cleaning up after chickens at an egg farm.

He said he and the other teenagers earned $500 a week, but the traffickers who lured them north kept all but $60. The trafficker, Arnoldo Castillo-Serrano of Guatemala, earned at least $225,000 off of the kids’ labor.

“I didn’t think it was illegal,” the now 19-year-old said. “I thought they were helping me because they spent the money to bring me here.”

Castillo-Serrano told the teen he owed him $15,000 for smuggling him into the U.S. The men held a deed to his family’s farm as collateral.

When they first arrived in the U.S. the teenagers were picked up by the U.S. Border Patrol and put in federal custody. That’s where Castillo-Serrano and his co-conspirators claimed them. They posed as friends of family. Federal officials at U.S. Health and Human Services handed the kids over to the trafficking gang.

Castillo-Serrano and two other men were indicted last year on trafficking and other charges. Castillo-Serrano will be sentenced June 27. Co-conspirators Conrado Salgado Soto and Pablo Duran Jr. were sentenced in April to 51 months and two years in prison respectively.

“The horrible trafficking crime that occurred in Marion, Ohio could have likely been prevented if HHS had adopted common sense measures for screening sponsors and checking in on the well-being of at-risk children -- protections that are standard, by the way, standard in foster care systems run by all the states,” Portman said.

Mark Greenberg, assistant secretary for the administration for children and families, said the challenge was a program that increased over three years from 6,000 youth and children to nearly 60,000.

“There is no question we were facing a whole set of capacity issues,” Greenberg said.

Since the fall of 2013 Central American families have sent at least 90,000 children to the U.S. A Senate investigation showed HHS placed at least 19 of those children into the hands of traffickers.

“The system was ripe for this to happen due to the surge and the way that the government reacted to it, the way that they relaxed their standards,” said Jessica Ramos, an attorney who works with unaccompanied minors in Ohio.

Since the Ohio arrests, HHS officials said they have stepped up sponsor screening practices and hired 70 more employees. They anticipate more unaccompanied minors. The violence in Central America shows no signs of stopping.

The teen from Guatemala said his parents, and his entire family, wanted him to escape the gangs.

“There would be killings every day,” he said. “These gang members with shaved heads and covered in tattoos, there’s a certain age they try to recruit you. If you say ‘no’ they basically take you with them and they kill you.”

Another victim of the trafficking ring was 18, from Honduras, when Castillo-Serrano pulled him into the labor ring. He pushed up his sleeves to show scars from the chicken claws and beaks. This young man, fearing immigration, stayed hidden in his bed when the FBI raided the trailer park. The other teens involved in the labor ring who helped FBI with their case received temporary visas.

“Everyone who comes here has a suitcase or a backpack full of dreams they left back home,” he said.

He wanted to be a nurse. After leaving the egg farm, he went to work at a dairy farm. Now that he’s not paying the traffickers, he has money to share with his family back home and he’s putting his sister through nursing school.

“She’s living my dream,” he said. “But it’s much harder for her because she walks out the door and she has to make sure she’s not going to get her head cut off.”

Fleeing violence like this puts underage migrants in a vulnerable position. Traffickers and even some U.S. employers realize that and take advantage of them. Trillium Farms executives said in a statement they were unaware a subcontractor hired to provide manual labor was involved in human trafficking.

“I mean it’s basically modern slavery,” said Brian DiFranco, an immigration attorney in Ohio. “It’s probably happening all over the country as we speak ...There are entire segments of labor in this country that not only rely, but thrive on this human trafficking.”

DiFranco said unaccompanied minors now make up a third of his caseload. He said until employers increase wages or lawmakers accept the U.S. needs people willing to do hard work for little money, some will continue to take advantage of those less fortunate and abuse the system.

Central American Women Abused, Tucson Official Says Mexico Cracks Down on Northbound Central Americans New Surge of Central Americans Seen on Border
By posting comments, you agree to our
AZPM encourages comments, but comments that contain profanity, unrelated information, threats, libel, defamatory statements, obscenities, pornography or that violate the law are not allowed. Comments that promote commercial products or services are not allowed. Comments in violation of this policy will be removed. Continued posting of comments that violate this policy will result in the commenter being banned from the site.