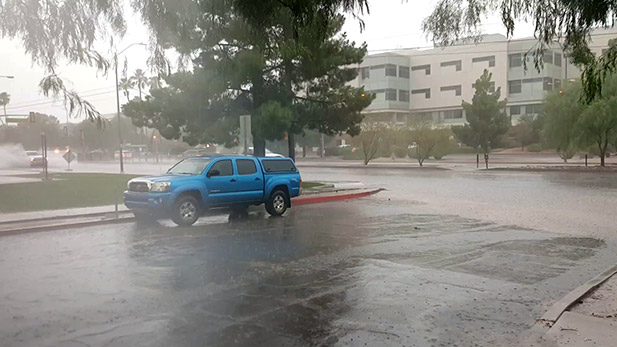 Tuesday's storm is not the end of wet weather for Southern Arizona.

More storms will hit the area Wednesday, and the incoming weather system could bring substantial moisture.

“The rainfall rates could be similar to what we saw yesterday," National Weather Service Meteorologist Ken Drozd said. "It looks like there’s maybe a little bit, slightly quicker movement [Wednesday], but I wouldn’t hang my hat on that. It could still drop a lot of rainfall in any given location.”

Any new rainfall could cause more flooding in the Tucson metro area.

Drozd said the ground throughout much of the area has already soaked up all the water it can hold, so subsequent rain will more easily cause flooding.

Parts of Tucson reported up to three inches of rain yesterday. That amount is about one third of the area's annual average total.

Public safety officials remind residents not to use roads that are flooded or closed, and one foot of moving water is enough to carry away most vehicles or knock people off their feet.

Newton Slows, Will Not Bring Much More Rain to Southeast Arizona Hurricane Newton Sending Heavy Rains to Tucson Southern Arizona's Monsoon Starts Strong This Year
By posting comments, you agree to our
AZPM encourages comments, but comments that contain profanity, unrelated information, threats, libel, defamatory statements, obscenities, pornography or that violate the law are not allowed. Comments that promote commercial products or services are not allowed. Comments in violation of this policy will be removed. Continued posting of comments that violate this policy will result in the commenter being banned from the site.