Homeland Security has renewed the virtual border fence contract, but experts suspect the agency will abandon the project by Michel Marizco TWEET SHARE

The Homeland Security Department has renewed the Boeing Corporation's contract to build a virtual border fence for another month. The agency has been tentatively extending the nearly one-billion-dollar contract one month at a time. Now, the program is nearly in tatters, and some security experts believe last week's renewal is the government buying itself time before backing out of the ambitious project. 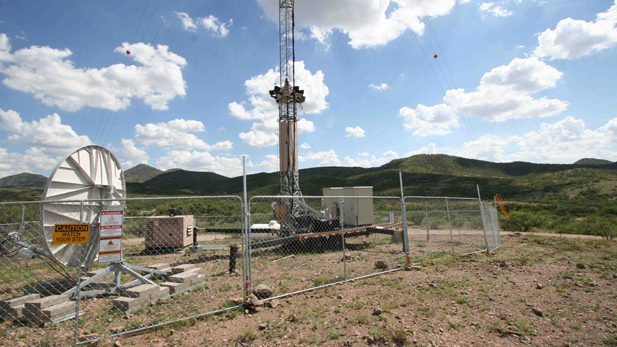 An SBI installation in Arivaca. Although the Department of Homeland Security recently renewed its month-to-month contract with the Boeing Corporation, which was hired to build the virtual border fence in 2006, experts say the government may soon abandon the project.
Michel Marizco

The project is called the Strategic Border Initiative or SBInet. And for more than four years, Boeing's been unable to complete it.

Linda Thomas was a high level manager working for a subcontractor Boeing hired to help build the project's towers and ground sensors. She walked away from the project in disgust after seven months and says now that the federal government wasn't keeping track of Boeing's failures. She describes a field test she conducted in Playas, New Mexico: 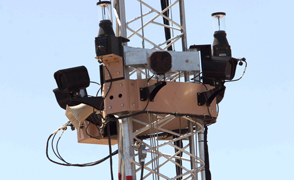 "We went out there and did a test of the microwave system and a colleague and I drove around in circles – for hours – so that the microwave could try and lock in on us and it just wasn't successful," she says.

Thomas says she felt that Homeland Security has invested so much money into this program that it can't back away now, or it stands to lose the last four years of work.

"Then I attended various meetings with Boeing and – I guess – the straw that broke the camel's back was pretty much a meeting at the end that I went to with very high level people and everybody was, at least in the Boeing family, to me, was just sitting around joking about how we weren't making progress and I just couldn't handle it anymore," she said. "And that's when I resigned."

The system, once predicted to cover the entire Mexican border, is now confined to two small stretches of southern Arizona. The idea of a border-to-border electronic wall appears to be over.

"What they're trying to do is keep the technology without keeping SBInet because the word SBInet says, 'Oh, that's that wasteful evil program that Bush had,' right? They don't want that," said Jim Carafano, a homeland security analyst with the Heritage Foundation in Washington. "So they want to figure out how they can fund this thing, at a lower level, more modest, and they're trying to square that circle."

Homeland Security officials declined to be interviewed for this story. In an email, they said that they are currently reviewing the "independent, quantitative, science-based reassessment of the SBInet program."

In the meantime, Homeland is investing in other technologies, both new and old. Next year, it is bringing in three more Predator B unmanned aircraft to fly the borders, creating a fleet of ten UAVs. Last month, the agency began another recruitment drive to hire 2,000 more agents for the southern border. Homeland Security has until December 18 to decide what it's going to do with the program.

Rural officials say towns are ill-prepared for asylum seekers State Sen. Engel running for Congress Border officials report a record number of apprehensions, but most are still being turned away
By posting comments, you agree to our
AZPM encourages comments, but comments that contain profanity, unrelated information, threats, libel, defamatory statements, obscenities, pornography or that violate the law are not allowed. Comments that promote commercial products or services are not allowed. Comments in violation of this policy will be removed. Continued posting of comments that violate this policy will result in the commenter being banned from the site.