In remarks about the the $716B defense bill the president did not mention McCain, with whom he has a long-running feud. by Jill Colvin and Darlene Superville, Associated Press TWEET SHARE 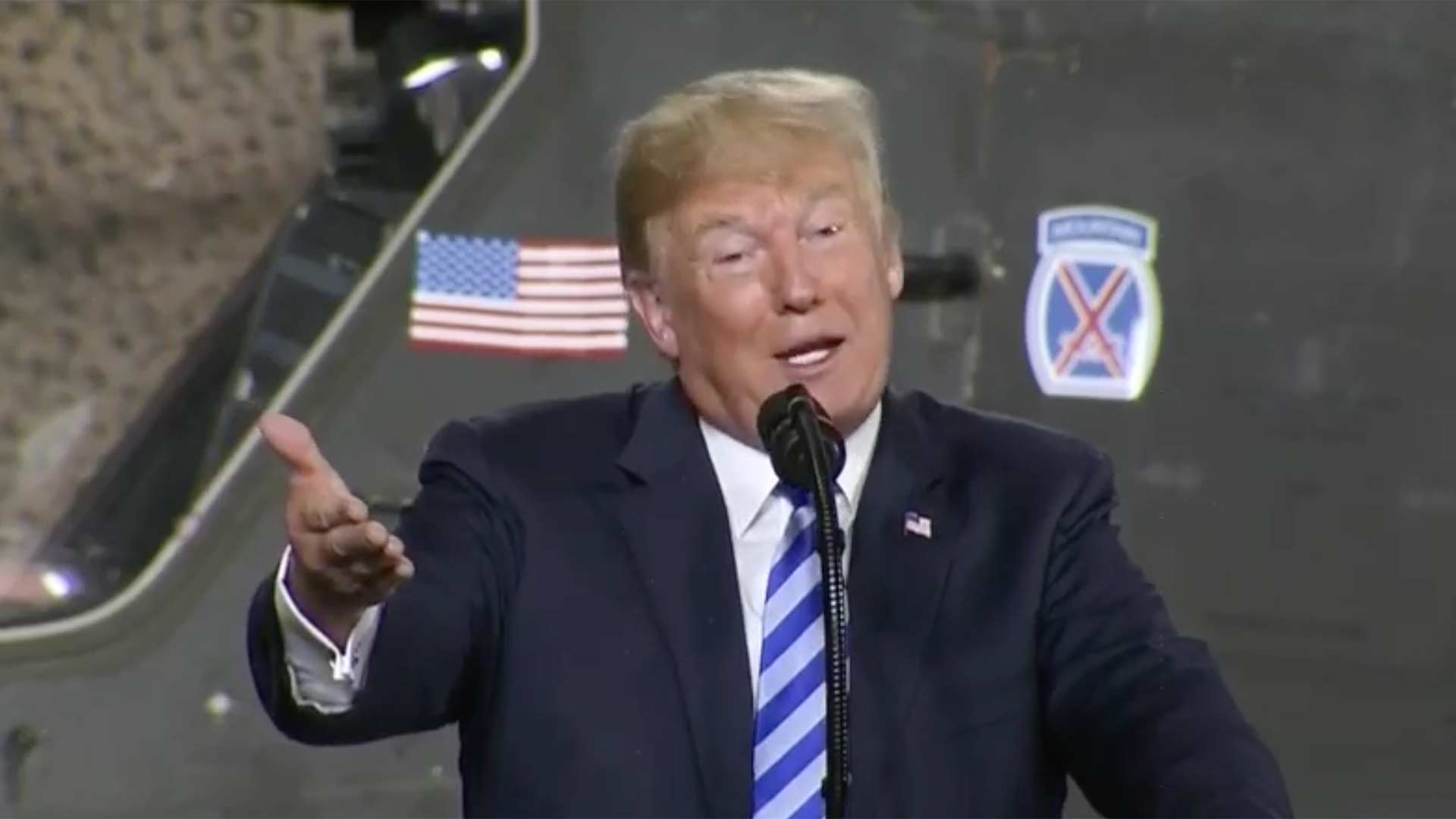 President Trump speaks at the signing of the Defense Authorization Bill, Aug. 13, 2018, in this image from C-SPAN video.

FORT DRUM, N.Y. — President Donald Trump on Monday signed a $716 billion defense policy bill named for John McCain but included no mention in his remarks of the Republican senator, who is battling brain cancer at home in Arizona.

Trump and McCain are engaged in a long-running feud that dates to Trump's 2016 presidential run. At campaign rallies, Trump regularly castigates McCain — without using his name — for casting a dramatic thumbs-down vote that doomed Trump's effort last year to repeal the Affordable Care Act, which was enacted by President Barack Obama.

Trump said there was "no better place than right here at Fort Drum" to celebrate passage of the defense bill, which will boost military pay by 2.6 percent, giving service members their largest increase in nine years.

"Hopefully, we'll be so strong we'll never have to use it. But if we ever did, nobody has a chance," he said.

Later Monday, Trump referenced McCain — again without naming him — while talking about Obama's health law at a fundraiser in Utica for Republican Rep. Claudia Tenney.

"I would've gotten rid of everything, but as you know, one of our wonderful senators had thumbs down at 2 o'clock in the morning," Trump said, pantomiming the gesture.

The bill authorizes billions of dollars for military construction, including family housing.

Besides setting policy and spending levels, the bill weakens a bid to clamp down on Chinese telecom company ZTE. It allows Trump to waive sanctions against countries that bought Russian weapons and now want to buy U.S. military equipment. The bill provides no money for Trump's requested Space Force but authorizes the military parade he wants in Washington in November.

The compromise bill removes a provision reinstating penalties against ZTE and restricting the company's ability to buy U.S. component parts. ZTE was almost forced out of business after being accused of selling sensitive information to nations hostile to the U.S., namely Iran and North Korea, in violation of trade laws.

The measure also includes provisions designed to improve how the Defense Department handles reports of child-on-child sexual assaults among the tens of thousands of children and teens who live and go to school on the military bases where their parents serve. An Associated Press investigation this spring documented broad failures of justice when military kids report incidents.

Among the changes, the bill creates new legal protections for students at Department of Defense Education Activity schools and requires the school system and the Pentagon to develop new policies for responding to reports on bases more generally. Schools and the armed services also must start tracking incidents. AP identified nearly 700 over 10 years, but that was a certain undercount.

The annual measure sets policies and a budget outline for the Pentagon and will be followed by a later appropriations bill.

Trump and McCain have had a strained relationship for years. During his election campaign, Trump declared that McCain, who was a prisoner of war for more than five years in Vietnam, was not a war hero, and he has publicly and privately blamed McCain for submarining the Republican health care bill last year.

In May, a West Wing aide dismissed McCain's negative opinion on Trump's CIA nominee during a closed-door meeting by saying of the senator that "he's dying anyway." Trump, who has long prided himself on never apologizing, believing it shows weakness, did not apologize, but the aide was later fired.

In a statement Monday, McCain expressed pride in the bill.

I'm proud the NDAA is now law & humbled Congress chose to designate it in my name. As Chairman of the Armed Services Cmte, I've found high purpose in service of a cause greater than self—the cause of our troops who defend America & all that she stands for. https://t.co/Gco9E57HdC

His wife, Cindy McCain, meanwhile, retweeted a post from CBS News that noted Trump had neglected to mention McCain at the signing.

Warship Adds Sen. McCain's Name, Honoring 3 Generations Immigration Will be 'Significant Component' of McCain Legacy Flake and McCain Denounce Trump's Attacks on the Media
By posting comments, you agree to our
AZPM encourages comments, but comments that contain profanity, unrelated information, threats, libel, defamatory statements, obscenities, pornography or that violate the law are not allowed. Comments that promote commercial products or services are not allowed. Comments in violation of this policy will be removed. Continued posting of comments that violate this policy will result in the commenter being banned from the site.