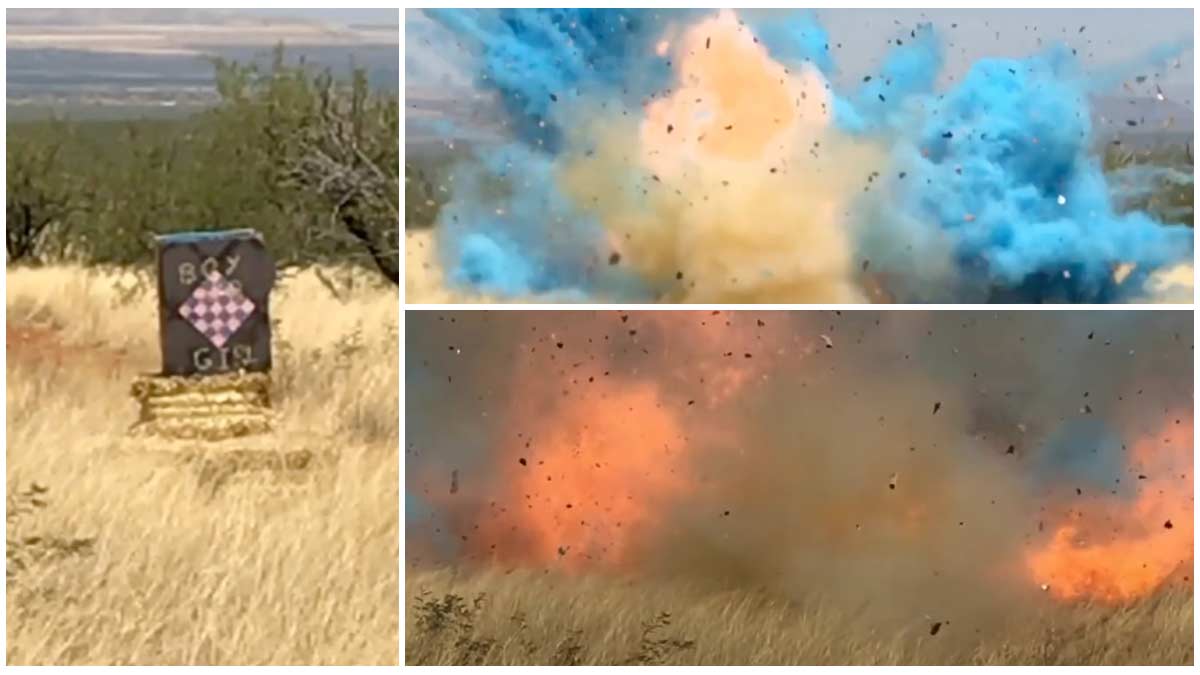 Images from video released by the U.S. Forest Service of the gender-reveal party that sparked the Sawmill Fire.

FLAGSTAFF — A video released by the U.S. Forest Service shows how a gender reveal event led to a costly wildfire in southern Arizona that forced about 200 people out of their homes.

The information gleaned from the video isn't new, but it's the first public visual of how quickly the tall, dry grass on state land near Green Valley went up in flames after an off-duty U.S. Border Patrol agent fired a rifle at a homemade target. The rectangular target with a diamond checkered design marked with "boy" or "girl" explodes, sending a blue substance in to the air.

A person whose identity was blacked out in the 49-second video moves toward the flames after a few seconds as embers and debris rise above the mesquite and acacia trees then backs up, and another unidentified person moves across the screen from right to left.

A male voice in a panicked voice twice shouts, "Start packing up!"

The US Forest Service released this video of the moment the Sawmill Fire was started. Dennis Dickey, an off-duty Border Patrol agent, shot at an exploding target during a gender reveal party. The fire burned 47,000 acres.https://t.co/XHhJGuDZag pic.twitter.com/rPl1o7ZDWy

The Arizona Daily Star first reported on the video it obtained Monday through a public records request, and it was shared widely on social media. The Associated Press received the video from the Forest Service on Tuesday.

Agent Dennis Dickey told authorities he constructed the target with a substance known as Tannerite that detonates when hit by a bullet from a high-velocity firearm, according to court documents. He reported the fire immediately to law enforcement on April 23, 2017, and was cooperative in the Forest Service investigation, authorities said.

The U.S. Customs and Border Protection said Tuesday that Dickey still is employed with the agency's Tucson Sector.

The fire burned about 73 square miles of mostly state and Forest Service land over less than two weeks, forcing evacuations and putting others on alert they might also need to leave their homes. The damage to state, federal and private land, and firefighting costs topped $8 million.

Dickey pleaded guilty in September to a federal misdemeanor charge of starting a fire without a permit. He was sentenced the following month to five years of probation. He also was ordered to make an initial payment of $100,000 in restitution and monthly payments of $500.

The gender reveal was for Dickey's pregnant wife, the Arizona Daily Star reported. He has said the fire was a "complete accident."

"I feel absolutely horrible about it," the newspaper quoted Dickey as saying the day he pleaded guilty in the case. "It was probably one of the worst days of my life."

Land management agencies have seen wildfires spark from lightning, abandoned campfires, chain saws, a horse clipping its shoe on a rock, tow chains dragging along the road, cigarette butts and welding outside on a windy day.

An exploding target to reveal a baby's gender is rare. Fire officials said gusty winds and the broken topography helped push the growth of the southern Arizona fire.

Part of Dickey's sentencing also includes working with the Forest Service on a public service announcement about the cause of the wildfire. Coronado National Forest spokeswoman Heidi Schewel said she wasn't sure Tuesday whether that's currently in the works.

Messages left for Dickey through his attorney and the Border Patrol weren't immediately returned.

Arizona under statewide curfew Governor imposes weeklong curfew after protests; Tucson officials say they weren't notified Local law enforcement condemn police actions in death of George Floyd
By posting comments, you agree to our
AZPM encourages comments, but comments that contain profanity, unrelated information, threats, libel, defamatory statements, obscenities, pornography or that violate the law are not allowed. Comments that promote commercial products or services are not allowed. Comments in violation of this policy will be removed. Continued posting of comments that violate this policy will result in the commenter being banned from the site.