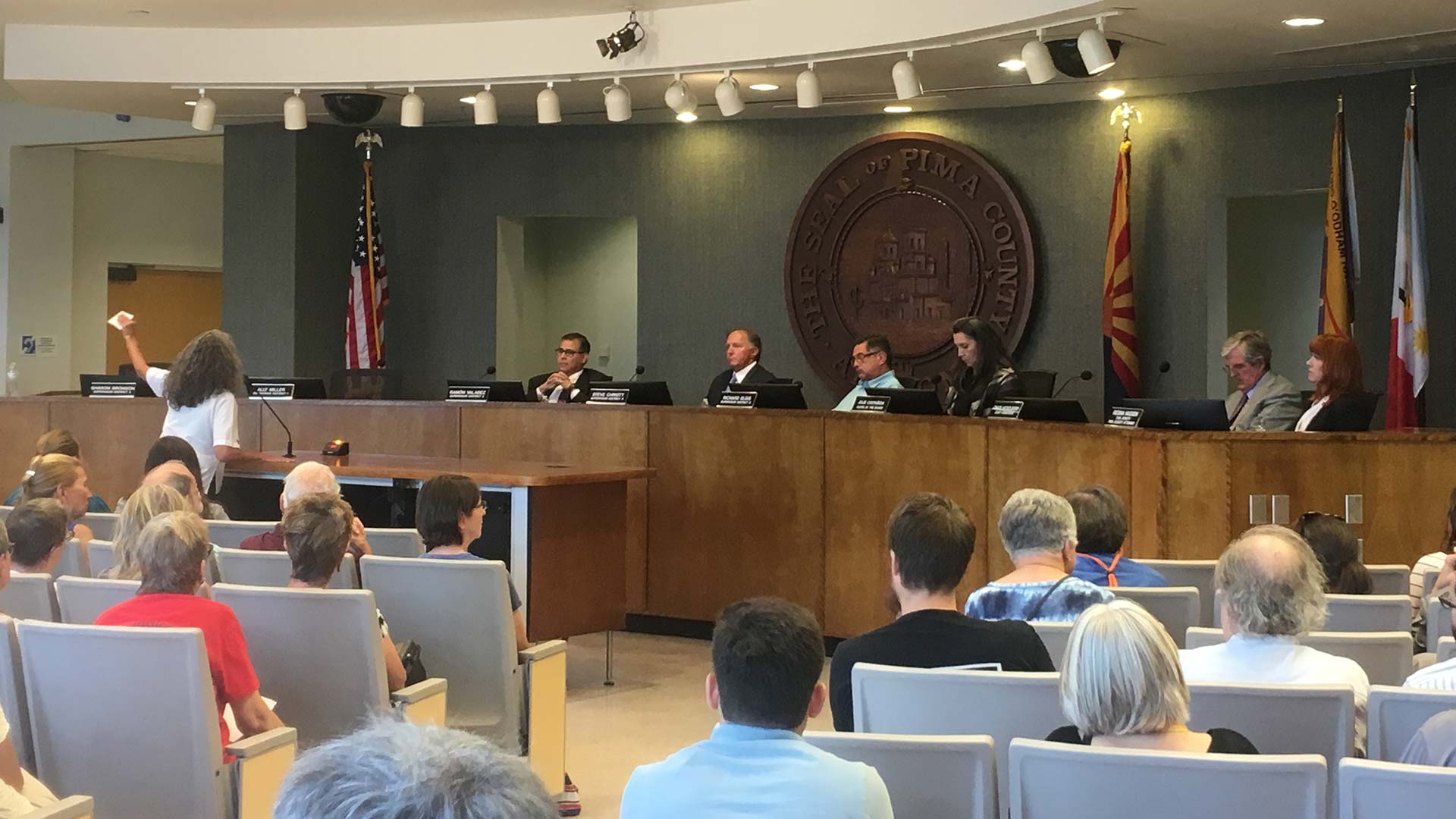 The Board of Supervisors hears public comment on the proposed plan to allow Catholic Community Services to use a portion of the county's juvenile detention center as a shelter for asylum seekers, July 22, 2019.
Emma Gibson/AZPM

The Pima County Board of Supervisors approved Catholic Community Services' request to use the county's Juvenile Justice Complex as a temporary shelter for asylum seekers.

The majority of the community members who spoke at the meeting were against the proposed new location. Many said they did not think it was ethical to house legal asylum seekers in an active juvenile detention center, and that Pima County should not fund a humanitarian response that county officials hope the federal government will reimburse through grants like Operation Stonegarden.

"We keep hearing the insistence that this is our only option, that without putting our families into jail cells they will be dumped on the streets, but we know this is a false narrative that has been intentionally and strategically deployed for some purpose amongst those with power," said Hannah Adair Bonner, a reverend in the United Methodist Church who works with asylum seekers in Tucson.

Yet, the board diverged from the public's input and voted 3 to 2 in favor of the proposal along party lines.

"This could be a good bridge, but it's a bridge, and we need to think about it that way," said Supervisor Richard Elías. "We need to have the folks from the faith-based communities get together and work on putting together a plan that will look better."

The religious charity Catholic Community Services now houses asylum seekers at the Benedictine Monastery on Country Club Road. The property owner plans to redevelop the site starting next month, prompting the need to find a new way-station for people traveling to other parts of the United States to await the outcome of their asylum claims.

The Board of Supervisors called Monday's Special Meeting to address the proposal before the shelter needed to leave the monastery. At the meeting Huckelberry said the agreement would not be a lease, but an operating agreement without a fee.

The county is renovating the unused spaces and making it habitable for asylum seekers.

How a group plans to transform detention center into space for asylum seekers CBP head defends accelerated border expulsions, blames migrants for increasing COVID-19 risk Fees for several immigration services to increase
By posting comments, you agree to our
AZPM encourages comments, but comments that contain profanity, unrelated information, threats, libel, defamatory statements, obscenities, pornography or that violate the law are not allowed. Comments that promote commercial products or services are not allowed. Comments in violation of this policy will be removed. Continued posting of comments that violate this policy will result in the commenter being banned from the site.