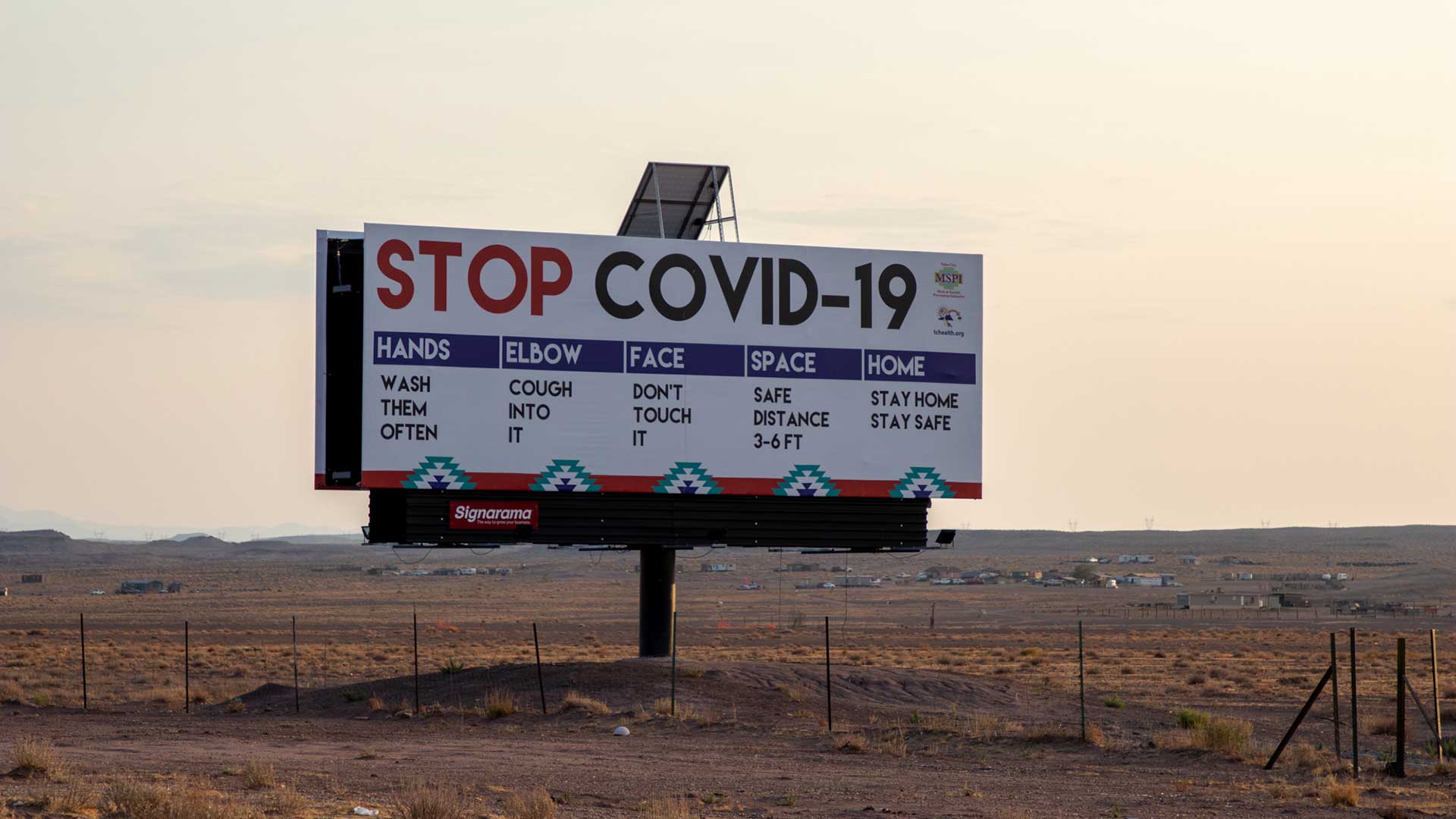 Legislation making its way through Congress aims to reaffirm that tribal epidemiology centers should have access to state and federal health data. Tribal leaders have had trouble accessing information to help fight COVID-19 and other diseases in places like the Navajo Nation, where this sign stands.
Daja E. Henry/Cronkite News

PHOENIX — A measure passed by the U.S. House aims to remove barriers that Native Americans face in accessing public health data – something advocates say is key to providing a clearer picture of how COVID-19 and other diseases are disproportionately affecting tribes.

Experts said Native Americans have been denied access to some state and federal health data for years, and the pandemic has further exposed this long-standing issue.

“I feel like I’ve been shouting this from the rooftops for 15 years,” said Abigail Echo-Hawk, director of the Urban Indian Health Institute, a tribal epidemiology center that serves Native Americans living off reservations, about 70% of the population.

Echo-Hawk pointed to incomplete or missing data related to the pandemic as just one example.

“I know my people are dying and they’re getting sick, and it’s not being acknowledged because it’s not in the data,” she said.

The Tribal Health Data Improvement Act is co-sponsored by Rep. Tom O’Halleran, D-Sedona, along with Democrats and Republicans from other states with large Native American populations.

The bill reaffirms that tribal public health authorities are entitled to access public health data. It would require the U.S. Department of Health and Human Services to give tribes, the Indian Health Service and tribal epidemiology centers direct access to such data.

It would also require the Centers for Disease Control and Prevention to work with tribes and the epidemiology centers to improve the accuracy of health data.

The measure passed the House on Sept. 29 and is pending in the Senate Indian Affairs Committee.

“This legislation directly addresses shortcomings that hindered Indian Country’s response to COVID-19,” O’Halleran said last month during a committee hearing on the bill. “This is an important step to ensuring that tribal communities are able to respond to public health challenges, not just COVID-19.”

The Urban Indian Health Institute in Seattle is one of 12 tribal epidemiology centers across the U.S. tasked with informing health policy in Native American communities — based largely on data collected by states and the federal government.

Incomplete or missing data makes strategic decisions about where and how to focus resources more difficult, especially amid the pandemic, said Stacy Bohlen, CEO of the National Indian Health Board.

Vanesscia Cresci, interim director of the California Tribal Epidemiology Center, said her organization has had difficulties accessing federal health data in the past. She noted that California is home to 109 federally recognized tribes, so it’s important tribal health officials can analyze data in ways unique to them.

“(It) allows us to tell our own story of how COVID is impacting California tribal communities,” Cresci said.

As part of the Affordable Care Act in 2010, Congress reauthorized the Indian Health Care Improvement Act, which established tribal epidemiology centers as public health authorities independent of tribal governments. That means they maintain the same legal rights to federal data as do states or counties.

A 2015 CDC document reaffirmed that these centers are public health authorities and explicitly stated they are entitled even to protected health information.

But both Echo-Hawk and Bohlen said the CDC has consistently withheld data from the centers, citing federal health privacy laws.

“So they wrote a brief that says we should have access to the data, but they have yet to operationalize that,” Echo-Hawk said.

“It seems like it’s a rather paternalistic approach to tribal nations and to tribal epicenters to cite HIPAA as a reason,” Bohlen said.

The 2015 document also points out inconsistent relationships between the tribal epidemiology centers and states. States are also required to share public health data with tribal nations and the centers, but Echo-Hawk said those relationships vary widely.

“Some won’t do anything,” she said, “and others are working hand in hand.”

Neither HHS nor the CDC responded to requests for an interview.

When pressed on data sharing at a June congressional hearing, CDC Director Robert Redfield vowed that the problems would be remedied.

“We’re committed to correcting that for all tribes,” he said. “One of the keys … is to make sure that we have secure data systems to transport the data. … As soon as that is finalized to maintain the security of the data, it will be transferred.”

In July, 26 members of Congress sent a letter to Redfield and HHS Secretary Alex Azar seeking more information about what the agencies were doing to ensure tribal epidemiology centers could access vital information.

“HHS and CDC must work to fully address public health data barriers for Native communities, starting with ensuring (the centers) have access to disease surveillance data guaranteed by law,” the letter stated.

Problems with accurate data are not unique to the COVID-19 pandemic. Native American birth and data records have been skewed for years, experts note. For instance, a 2019 study in Oklahoma found nearly 4,000 Native Americans were misclassified as another race on death certificates over a five-year period.

“It’s a very common saying in Indian Country that we are born Indian and we die white, because that’s how we’re classified on death certificates,” Echo-Hawk said.

That inhibits research into how certain ailments, including cancer, diabetes and kidney disease, affect mortality within these communities.

Health care providers also often neglect to record a patient’s race and ethnicity. CDC data indicating that American Indians and Alaska Natives are 3.5 times more likely to contract COVID-19 than whites includes information from just 23 states. That’s because only those states had race and ethnicity data for at least 70% of COVID patients.

This ongoing issue, Echo-Hawk said, “effectively hides the disproportionate impact of COVID-19 within our communities.”

San Carlos Apache Tribe nearly halts spread of coronavirus Local tribes update current COVID-19 health policies Delta variant of COVID-19 in Pima County
By posting comments, you agree to our
AZPM encourages comments, but comments that contain profanity, unrelated information, threats, libel, defamatory statements, obscenities, pornography or that violate the law are not allowed. Comments that promote commercial products or services are not allowed. Comments in violation of this policy will be removed. Continued posting of comments that violate this policy will result in the commenter being banned from the site.