The Battle Of Picacho Pass, Brought Back To Life

On April 15, 1862, two small groups of Union and Confederate soldiers fought a battle near Picacho Peak, northwest of Tucson. The engagement left several Union troops dead, including the detachment's commanding officer, and wounded some on each side.

The Battle of Picacho Pass was the western-most engagement in the Civil War. It was more a skirmish than a battle. But each year, it's remembered by a group of historical re-enactors. 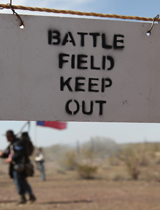 The spectators are kept behind a "battle" line at the re-enactment.
Mark Duggan

This year, they staged the 150th anniversary of the battle. They also re-enacted other western Civil War battles, including ones at Glorieta Pass and Valverde, both fought in New Mexico. This dedicated group of people meets for 3 days every March at Picacho Peak State Park. They pitch canvas tents in the desert, dress in period authentic clothing, and take to the battlefield with rifle, musket and cannon. In the evening, after the spectators are gone, it's tall tales around the fire, a few bottles of sarsaparilla and Dutch oven cooking.

The annual re-enactment of the Battle of Picacho Pass is a well-attended affair. Several thousand people array themselves across a hillside to watch the battlefield. Some are lounging in lawn chairs, others standing on rocks for better views. More than a few people are glassing the distant reaches of the battlefield, trying to figure out where the artillery is. You can hear it - a violent, shuddering BOOM! that echoes off of the rocky spires of Picacho Peak. The cannons are most likely 12 lb. Mountain Howitzers, a piece of field artillery commonly used in the western and prairie campaigns of the Civil War.

Closer to the spectators, close enough to make some of them uncomfortable, soldiers are collapsing, groaning, feigning deep and fatal gut wounds. If it wasn't for the P.A. announcer, it might be hard to tell that this is all an elaborate act.

The event includes more than battle re-enactments. There are cavalry and artillery demonstrations, a theatrical troupe and a sutler's row. The re-enactors even open their orderly encampment to spectators, who can see a little of what life was like when a canvas "A-style" tent was home.

In between battles, spectators talk to re-enactors and marvel over their tin dinner plates. They ask delicate questions about the practicalities of hoop skirts, which were often worn by women in the Civil War-era, and are widely seen at re-enactments. They sip iced root beer and browse the sutler shops, trying on moccasins and sizing up muskets. Then, when the next battle is announced, they hurry back to the battlefield to find a prime viewing spot. 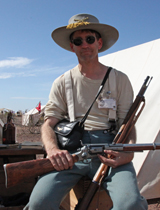 Barry Schrock is playing both Union and Confederate soldier in two of the battles. He says there's no special training to become a re-enactor; anyone can join in, be handed a jacket and heavy boots, something to make them look 150 years old.

Barry says he's wondered what the battles actually look like. His role is to fall down dead early in the shooting. And in order to be authentic, he can't pop his head off the ground to watch the battle around him. But he will be watching the Picacho Pass battle re-enactment. He's not falling down dead in that one, so he'll be on the sidelines, watching other grown men like himself play soldier in the dirt.

Some don't bother calling the Battle of Picacho Pass a battle. They call it a skirmish, at best, or just an engagement. A Union detachment of the 1st California Cavalry decided to check out rumors of Confederate soldiers near Picacho Peak. They found them in a low pass between the peak and the Picacho Mountains to the north. The Confederates, from what was then called the Arizona Battalion out of Tucson, laid down heavy fire. After 90 minutes, 3 Union men lay dead and several others were wounded. Confederate losses have always been unconfirmed, save for 3 men that were taken prisoner by Union soldiers.

Despite the talk of "minor skirmish," the battle still looms large in the minds of some. Including these re-enactors.

The website War Times Journal notes "the battle of Picacho Pass may have been only a skirmish compared to the great conflagrations in the east, but to the men killed and wounded there...it was the Civil War."

Richard Thomas on what it means to be Atticus Finch. Children of the Holocaust: The story of a survivor from the former Soviet Union "Here I Am": Celebrating 100 years of powerful women in history.
By posting comments, you agree to our
AZPM encourages comments, but comments that contain profanity, unrelated information, threats, libel, defamatory statements, obscenities, pornography or that violate the law are not allowed. Comments that promote commercial products or services are not allowed. Comments in violation of this policy will be removed. Continued posting of comments that violate this policy will result in the commenter being banned from the site.