Vaccinations are humming along in Arizona. But in neighboring Sonora, the pace is much slower. by Murphy Woodhouse TWEET SHARE 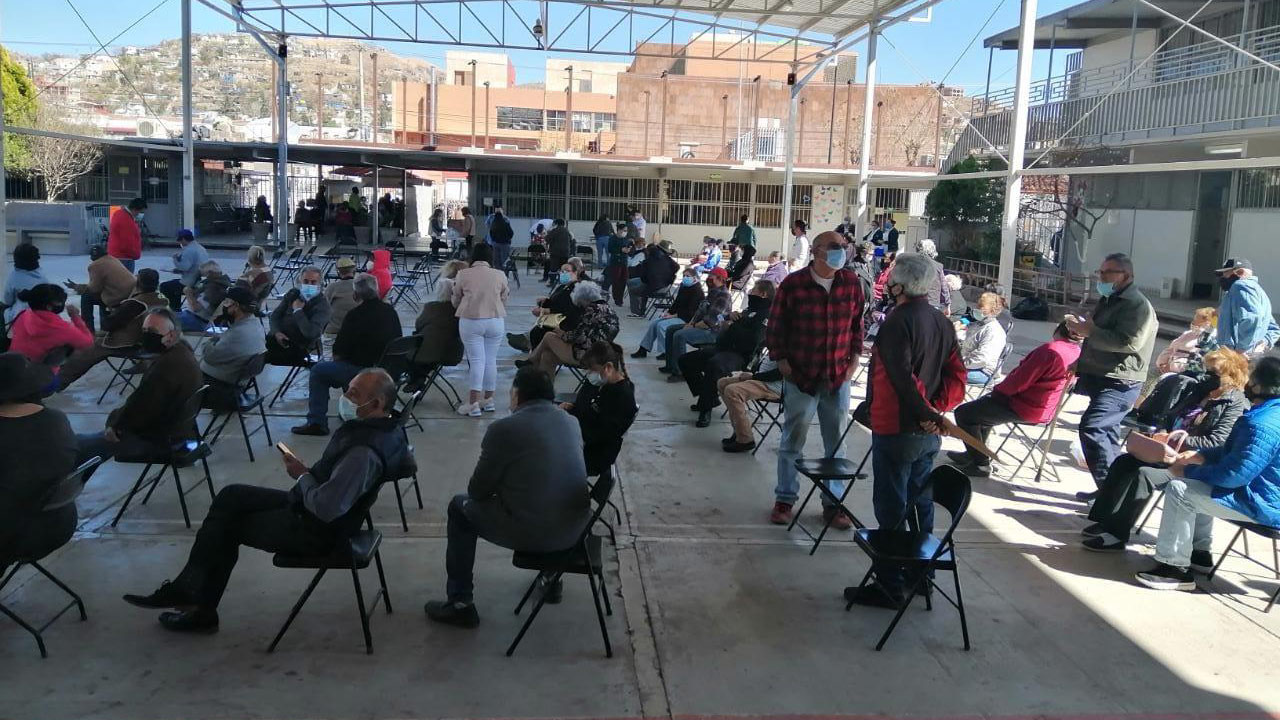 Recently vaccinated residents of Nogales, Sonora, wait while being monitored for possible side effects on March 11, 2021.
Karla Soto

Several weeks ago, Rafael Soto was one of thousands of older Nogales, Sonora residents who received his first dose of the coronavirus vaccine. His daughter Karla Soto accompanied him, and shared photos and videos, which show masked, elderly Sonorans in close quarters waiting patiently for the life-saving medicine.

But soon Soto had his shot, and the amiable man quickly made friends with another recently inoculated Nogalense while being monitored for bad reactions.

“They treated me very well,” he said. “In an hour, I was vaccinated.”

It left his arm a bit sore, but otherwise he said he had no negative responses.

So far, Soto is one of roughly 14,500 older residents who have received a dose in a city with an official population of more than 260,000, according to late March figures provided by federal delegate Jorge Taddei. The figure doesn’t include medical personnel.

Just north of the border in Santa Cruz County, things have been moving much faster.

“We’re essentially administering all the vaccines we get weekly,” he added. “At the moment we do about 700 vaccines a day.”

And no shots have gone to waste so far, he said. As of March 24, nearly 24,000 doses had been administered in Santa Cruz County, according to state data, substantially more than the sprawling Sonoran city to the south, which has five times the population. At around the same time, Arizona alone had administered roughly half as many doses as all of Mexico.

“I think we all have a concern about that disparity,” Pereira said. “Because these are cities that are very closely connected.”

Santos Yescas, who grew up in Nogales, Sonora, and now works in economic development on the Arizona side, knows how connected they are as well as anyone.

“If we are not vaccinated in the same proportion, in the same way (as) Arizona,” he said. “Because we are connected and we are seeing each other very often, so we are going to continue spreading the virus, and continue being a not healthy community.”

“We definitely need the vaccinations to start increasing on both sides of the border, preferably more on the Sonora side, so that we can get the border open,” said Josh Rubin, a vice president with Javid LLC, which helps export manufacturers get set up in Nogales, Sonora.

He was referring to the northbound border restrictions imposed over a year ago to slow the virus’ spread. They’ve been renewed monthly since March 2020, and have kept many Sonorans from crossing, devastating border businesses in Arizona. But Rubin is also worried about economic impacts south of the border.

“What we could end up seeing is a reemergence of the virus, that could end up resulting in additional shut downs to the maquiladora industry,” he said.

He doesn’t think that’s likely, but memories of last year’s shutdowns are fresh.

“It's definitely a time in my life that we probably would never want to relive at all.”

But some feel much more needs to be done to close the yawning global vaccine gaps.

“Basically, the majority of vaccination is happening in 10 countries,” said Dr. Mohga Kamal-Yanni, a senior policy adviser to the People’s Vaccine Alliance, a coalition of groups including UNAIDS and Oxfam that is pushing for free, not-for-profit global vaccine access.

The New York Times recently reported that wealthier countries have so far accounted for roughly 90% of administered doses.

“The science says to control this virus you need to reach herd immunity in every population,” Kamal-Yanni said.

To quickly and equitably meet global demand, she said that vaccine technology needs to be shared, and intellectual property needs to be waived, so that more of the crucial medicine can be made around the world.

Last week, CNBC reported that the White House was weighing such a move.

'Let It Be Shared'

Back in Sonora, Soto said he’s grateful for the vaccine he received. But he wants to see more people benefit as well.

“Let it be shared with the whole world,” he said. “So that everybody has access to the vaccine.”

TPD gets more AEDs Border officials warn of heat dangers in south Arizona Slow summer of adjustment expected for COVID-aware citizens
By posting comments, you agree to our
AZPM encourages comments, but comments that contain profanity, unrelated information, threats, libel, defamatory statements, obscenities, pornography or that violate the law are not allowed. Comments that promote commercial products or services are not allowed. Comments in violation of this policy will be removed. Continued posting of comments that violate this policy will result in the commenter being banned from the site.