A closer look at Level 3 electric vehicle (EV) chargers, and the current controversy over which will become the industry standard. by Ben Nead Tweet 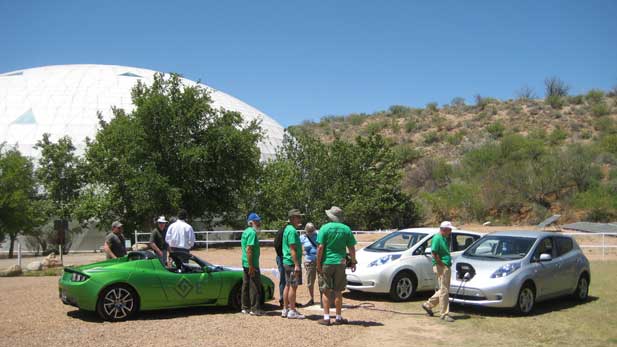 The Biosphere 2 Model City research facility in Oracle, Arizona: Saturday, April 21, 2012. Members of the Tucson Electric Vehicle Association, TEVA2, visit with Biosphere 2 staff and officials from GoE3, an Arizona-based company that has promised to deploy 500 of their modular quick chargers across US highways over the next 18 to 30 months. Two Nissan Leafs and a Tesla Roadster is also shown.

The modern EV appears poised to become a viable choice for many considering the purchase of a new car today. These autos have all the safety and comfort features found on their gasoline powered counterparts. EVs also have the added advantage of zero tailpipe emissions and - as the existing power grid is modernized - the ability to have their net pollution output drop even further. Thanks to our sunny climate, southern Arizona home owners can install increasingly affordable photovoltaic (PV) panels onto their rooftops, to generate enough solar- produced electricity to power both their homes and their EVs. Regardless of how the electricity is produced, dependency on crude oil from potentially unreliable and/or hostile foreign sources can now be discounted.

So, why aren’t EVs universally embraced? It appears the main resistance expressed by most potential buyers comes down to limited range provided by existing battery technology: the so-called “range anxiety” effect, or the fear of having ones EV run out of power far away from home and not near a public charging terminal. The most popular EV at the moment, the Nissan Leaf, has a range of about 85 to 90 miles on a single charge, which is typical. Tucson was an early test market for the Leaf. The car is now available for general sale nationally and, as of mid 2012, approximately 300 examples have been sold locally. 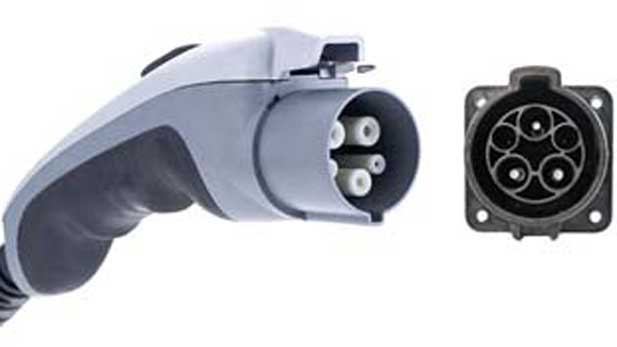 The J-1772 plug set, the de facto North American standard for Level 2 220 volt AC charging since 2009, is featured on home-installed EV chargers sold with new vehicles and found at most public terminals.

Even as domestic and foreign automobile manufacturers begin to sell EVs in North America, several different and competing charging connector/plug designs are in use. All of these modern EV plugs, obviously, allow for the needed transfer of electrical current. But they also transmit vital computer data back and forth between car and terminal, to ensure a correct and safe charging sequence for the sophisticated lithium batteries. All of the major auto manufacturers agreed in 2009 to use the J-1772 plug specification for 220 volt alternating current (AC) Level 2 EV charging in the North American market. Amazingly, though, no similar standard exists yet for the high speed 440 volt direct current (DC) Level 3 charging interface. The result is that a Level 3 “format war” could ensue.

Level 2, via the J-1772 plug, allows most modern EVs to completely recharge in about 5 to 8 hours. This is the same equipment that all US purchasers of new EVs receive from the dealership for charging at home and it’s also what all of the estimated 50 public charging station in the metro Tucson area now employ.

Most EV owners recharge their cars at home and at night, when the car is typically not in use and while utility rates are also at their lowest. Public Level 2 charging terminals are used to “top off” batteries when the EVs are parked at retail businesses or at work. This scenario works sufficiently well for most commuters, who might only need to travel by car 50 miles or less on any given day. The one main disadvantage of Level 2 charging is that it takes too long for EV owners to use while they’re attempting extended excursions, as a multiple hour recharge every 80 miles or so isn’t conducive to long distance freeway travel. 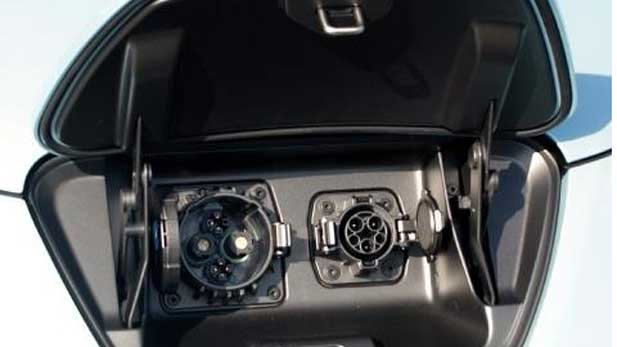 Underneath the charging door of a Nissan Leaf, showing the Level 3 CHAdeMO (left) and Level 2 J-1772 (right) receptacles.

LEVEL 3: CHARGING QUICKLY, BUT DEPLOYING EVER SO SLOWLY

Level 3 charging allows the typical modern EV to be completely (or at least up to 80%) charged within half an hour or less. The high purchase price and industrial scale electrical requirements of Level 3 charging equipment, though, virtually guarantees that such terminals will be owned and maintained by businesses or government entities, not EV drivers. But Level 3 charging is a potential game changer for those wishing to turn their currently city-bound EVs into ones with more regional aspirations, as well as doing much to alleviate “range anxiety.” Level 3 chargers, at least at first, are expected to be found primarily along busy highways and connecting cities, as opposed to being located inside the confines of large metropolises. Despite promises to the contrary regarding the timely deployment of Level 3 terminals these past couple of years, however, no installations have occurred yet in southern Arizona. 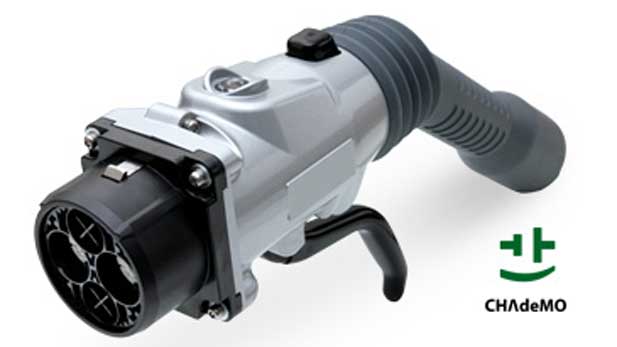 The Japanese CHAdeMO plug has already been adopted in several foreign countries as the preferred 440 volt DC Level 3 standard.

To add another wrinkle to the Level 3 story, a “format war” appears immanent. In one corner is the Japanese CHAdeMO (an acronym, roughly translated, for “charge on the go,”) which is already installed on the majority of the 10,000 plus - and growing - Nissan Leafs imported into North America. Another competitively priced EV from Japan, soon to be sold in southern Arizona, the Mitsubishi i, will also feature a CHAdeMO Level 3 plug .

The other Level 3 contender for the North American market is an expansion of the existing J-1772 Level 2 plug. The J-1772 Combo, as it is known, simply adds another receptacle onto the bottom. Its proponents, the Society of Automotive Engineers (SAE) and Underwriter Laboratories (UL,) contend their new Level 3 standard is electrically more robust (higher amperage rating,) while also more refined in terms of data transfer, when compared to the venerable CHAdeMO.

No fewer than seven auto manufacturers - Audi, BMW, Daimler, Ford, General Motors, Porsche and Volkswagen - have all agreed to support the Level 3 J-1772 Combo for their upcoming North American EV products. But even with this impressive roster, critics contend the SAE/UL’s J-1772 Combo effort may be too little, too late. By the time all of the above companies have their respective EVs ready for US sale, there will already be tens - possibly hundreds - of thousands of Japanese-built, CHAdeMO-equipped EVs on the road.

Silicon Valley’s high end EV manufacturer, Tesla Motors, has their own Level 3 plug for both it’s limited edition Roadster and the upcoming Model S 4-door luxury sedan. This is largely because Telsa actually had their Roadster available for sale prior to 2009, when the Level 2 J-1772 was officially adopted by the rest of the the industry. Optional cables are available from Tesla to mate their proprietary charging plug to either J-1772 or CHAdeMO and, soon, to the new J-1772 Combo. 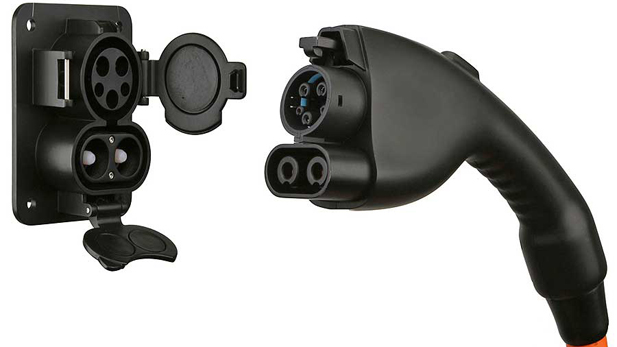 The new J-1772 Combo plug features a Level 2 J-1772 AC connector on top, with a secondary connector on the bottom to provide a DC Level 3 quick charge interface. At least seven domestic and European auto manufacturers are adopting it as a standard. But, with 10,000+ CHAdeMO equipped Leafs already sold in the US, is it too late?

With no fewer than three different competitors vying to become the official North American Level 3 standard, charging infrastructure manufacturers and providers are certainly going to be challenged. Arizona-based GoE3 thinks they have a solution to the problem. Their recently announced upcoming series of EV charging terminals will be the first in the industry to feature a modular, open architecture design, compliant to both Level 2 J-1772 and all Level 3 standards to be used in North America. As the marketplace determines which Level 3 standard becomes ubiquitous, different charging modules can be popped in and out of these roadside GoE3 units with the same sort of ease that one would associate with a computer blade server. GoE3 has announced plans for nationwide deployment of at least 500 of their modular L2/L3 chargers over the next 18 to 30 months. This includes the 260 mile I-10 / I-17 corridor between Tucson and Flagstaff.

A Level 2 terminal from GoE3 was officially unveiled at the University of Arizona’s Biosphere 2 research facility at their Earth Day celebration on Saturday, April 21, 2012. The unit will be upgraded to L2/L3 status by the end of the year. The installation at Biosphere 2 is part of the research facility’s Model City project, which, among other things, tests the viability of solar PV and grid storage battery technology, and how well these systems can adapt to the demands of supplying emergency power to a variety of electrically-demanding devices - such as Level 3 EV charging terminals - when unexpected disruptions occur. 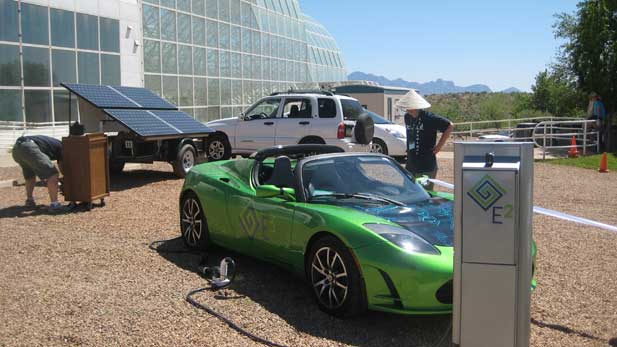 An onlooker admires the Telsa Roadster, charging via GoE3’s Level 2 charger at Biosphere 2. This particular charger will be upgraded to modular Level 2 and Level 3 (L2/L3) status by the end of 2012. Note the J-1772-to-Tesla adapter near the passenger door
MORE: Arizona, Arizona Spotlight, Economy, Environment, Science, Technology

A grassroots Tucson baker wins a national award for excellence. Contreras Fire burns more than 18,000 acres Senate hears bill on Grand Canyon mining
By posting comments, you agree to our
AZPM encourages comments, but comments that contain profanity, unrelated information, threats, libel, defamatory statements, obscenities, pornography or that violate the law are not allowed. Comments that promote commercial products or services are not allowed. Comments in violation of this policy will be removed. Continued posting of comments that violate this policy will result in the commenter being banned from the site.