The 40-year-old Tucson native had spent eight and a half years in the U.S. Marine Corps and served in Iraq, where he sustained serious injuries.

He’d undergone months of surgery and rehabilitation before making his way back to Arizona, where his wife and two children were waiting to welcome him back and move on with their lives.

But Javier couldn’t leave the battlefield behind.

“You come back and you’re like, OK, we did what we did over there and it’s over and done with,” Javier says. “Then you come back here and you’re just not sleeping.”

Night after night, Javier sat awake in his silent home, convinced something terrible would happen to his family if he slept.

During the day, he was on guard and angry. Groups of people set him on edge.

“If we went someplace, he was watching everybody and everything, and always having to be in the back of a room, in a protective mode,” recalls Lydia, Javier’s wife of 15 years. “He couldn’t be where he couldn’t see all the people.”

Troubled by her husband’s transformation, Lydia pushed Javier to get help.

In late 2004, Javier went to the Southern Arizona VA Health Care System (SAVAHCS), expecting to get yet another prescription for painkillers and sleeping pills. But he found the Post Traumatic Stress Disorder Clinic instead.

For 35 years, the clinic has served veterans with PTSD, an anxiety disorder that can develop after someone experiences a traumatic or life-threatening event.

Experts estimate that 10 percent to 20 percent of combat veterans suffer from PTSD at some point in their lives. The condition is common in veterans and other trauma survivors because it’s useful, says Dr. Michael Marks, lead psychologist for SAVAHCS and director of its PTSD program.

Marks has watched PTSD cases steadily rise over the past few years, as more than 2 million veterans have returned from Iraq and Afghanistan.

Javier enrolled in the program. That’s when things got rough, he says.

“They start poking at things you don’t care to remember, the bodies and all the other things you had to see or do,” he explains. “You have to think about it to get over it.”

Marks and his team, which itself includes two veterans, ask participants in the treatment program to confront the triggers of their anxiety, whether it’s groups of people or specific memories.

They must write down and record their traumatic experiences and then re-read or listen to them daily, while also sharing them with a counselor or a group of fellow veterans.

Through what’s called cognitive processing therapy, participants then learn new ways to react to these triggers. Veterans examine their behavior—what brings on their anger or despair, how they feel when it happens, and why—to identify and manage their responses.

The idea is to habituate—to get used to the thoughts and situations that set off PTSD symptoms so those symptoms are less easily triggered, and to cope with those symptoms in healthy ways when they do arise.

In the process, veterans rebuild how they see the world.

For veteran Jamie Jansen, the beliefs that grew from her time at war made it hard to admit she had a problem to anyone, even herself.

Admitting that she needed help was “like saying the sky is purple,” she says.

Jansen served in Iraq as an Army light-wheeled vehicle mechanic. When she came back to the U.S., she married, had three children and struggled to keep her life under control.

“I’m in the Reserves, I’m a staff sergeant, I need to have my stuff together, I need to be a leader, be all these things that I believe in that I should be,” Jansen says. “It’s crushing because you have to hold it together, but you just can’t.”

After hiding her trauma for years, everything began to fall apart.

Jansen stopped sleeping and started checking on her children as many as 10 times a night. She couldn’t convince herself that her family was safe, or that she could trust anyone but herself.

Like Javier, Jansen found her way to the PTSD program. She spent most of 2011 working through the issues that had brought her life to a standstill. 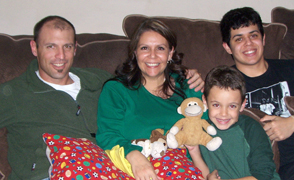 “It’s really, really hard to challenge something that you’ve held onto so tightly for so long. But once you do it’s amazing, it’s liberating,” she says. “Once I started using the techniques and being more mindful and recognizing things for what they are and not what I’ve been telling myself they were for all this time, it just… it just freed me up to live.”

Today, Jamie Jansen is taking time to enjoy her family. Javier is counseling other veterans coping with PTSD. He urges struggling soldiers to seek help, because he knows firsthand that it’s possible to heal.

“It took a long time, but he’s back,” says Lydia, who feels her family has grown closer through Javier’s journey. “Some people don’t think it gets better, but it can. You just have to stick with it. I’m glad I did.”

Military Suicides on Rise; No Simple Solutions Ducey: Arizona must push back against Biden vaccine mandate The intersection of mental health and crime
By posting comments, you agree to our
AZPM encourages comments, but comments that contain profanity, unrelated information, threats, libel, defamatory statements, obscenities, pornography or that violate the law are not allowed. Comments that promote commercial products or services are not allowed. Comments in violation of this policy will be removed. Continued posting of comments that violate this policy will result in the commenter being banned from the site.