The arid climate in Tucson limits rainfall to approximately 12 inches per year, more than half of which falls during the annual monsoon.

Many locals have become passionate about harvesting that rain. Logan Byers is one of them. She is a local landscape designer, and sees the connection between life and rain.

“It’s important for people to get involved in rainwater harvesting here, especially in Tucson, (and) the Sonoran Desert," Byers said. "...we are water. Show me something that’s alive that doesn’t need water.”

While rainwater here is scarce in comparison to some regions, Tucson still receives its fair share, Byers said. She creates landscape designs that accentuate the natural features of a property and capture rain when it falls.

“We get enough rain on each residential property to have a beautiful, lush environment like this, if we would just harvest it,” she said, gesturing to the side yard she recently completed. When the rains come, the water collects and feeds surrounding plants and trees.

After one of those rains, Byers stood knee-deep in rainwater that collected in the drainage basins. 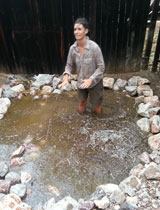 A Flagstaff transplant, Byers said she embraced the ecology of the desert after seeing a man directing rainwater into a street side water basin during a morning monsoon.

That man, named Brad Lancaster, is a community activist who is well known and respected in the rainwater harvesting community. He has written two books on the subject. Lancaster has also spearheaded efforts to plant trees and harvest rain in the Dunbar Spring neighborhood, near downtown Tucson.

“More rain falls on the surface area of Tucson in the typical year of rain, than the entire community consumes of utility water in a year," he explained. "The unfortunate thing is we don’t capture that, the bulk of that leaves and so then we import...more water from the Colorado or pump from the groundwater. We don’t need to do that to the extent we do, if we capture what we have readily falling for free from the sky.”

In the public right of way alone, Lancaster said they are harvesting 600,060 gallons of water per year that was previously lost to runoff and evaporation. One of the most effective strategies he advocates is the curb cut.

When it rains, Lancaster can often be found observing the flow of water in the neighborhood and how well the curb cuts and basins are working. He said it also gives him a chance to get out and visit with his neighbors.

Curb cuts and curb cores require a City of Tucson permit and a licensed contractor to do the work.

The curb cut is just one of the ways that folks in Dunbar Spring are harvesting rain. Lancaster encourages this method, and helps people learn about it in other neighborhoods as well.

“My advice would be, just start; start with simple basins, go and see other sites where people are doing it, get a better understanding," he said. "Read some books about it, go to some free talks, and then start talking to your neighbors and work together, because it’s so much more fun and the work is so much quicker if you work together.”

Lancaster sees rainwater harvesting and related sustainability efforts as ways to improve the quality of life.

Beyond the here and now, he sees a legacy.

“If this is your home wherever you are, it makes sense to enhance that place, so it’s a better life for us and our kids and everyone to follow," Lancaster said.

For information on curb cuts or curb cores contact the Stormwater Management Section, Department of Transportation, City of Tucson. Or, contact City of Tucson landscape architect Gary Witwer, at 791-5100.

Local Kids Benefit from Nationally Recognized Ecology Program AZ Residents Look to Alt Types of Grass for Sustainability Tucson Nonprofit, Officials Collaborate to Preserve Water
By posting comments, you agree to our
AZPM encourages comments, but comments that contain profanity, unrelated information, threats, libel, defamatory statements, obscenities, pornography or that violate the law are not allowed. Comments that promote commercial products or services are not allowed. Comments in violation of this policy will be removed. Continued posting of comments that violate this policy will result in the commenter being banned from the site.