Local Junk Shop May Be Home to Friendly Ghosts

A local Tucson thrift store may be home to more than just eclectic antiques and knickknacks. Filled with shelves holding everything from old records to mannequin faces, Betty Blues Junk Shop might also have some paranormal spirits haunting the store.

My fellow intern, Yoohyun Jung and I visited the shop late one Friday night to see what was really going on.

Owner Kim Kysar first noticed strange things when she moved into the vacant South Plumer Avenue building two years ago. Little incidences of merchandise flying off the walls and the shelves went unexplained.

Then Kysar installed security cameras throughout the store and was able to capture the strange phenomena on camera. 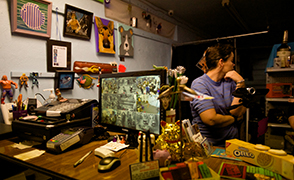 Rebecca, one of the TRIPS investigators, examines the atmosphere of Betty Blues Junk Shop.
Yoohyun Jung

She started posting the evidence onto the store’s Facebook page, which caught the attention of the Tucson Researchers Investigating Paranormal Sightings. The TRIPS team, who only wished to be referred to by their first names, conducted an investigation of the store.

“We do audio recordings with digital voice recorders,” Rebecca, one of the TRIPS investigators, said. “We use various video equipment with infrared visions, night vision, full spectrum. We use still cameras.”

Rebecca saidthe team usually has the most success gathering audio evidence. One type of audio analyzing equipment they use is something called the “spirit box.”

“It’s like a modified radio,” Carrie, another TRIPS investigator said. “The theory is that with sweep rate, it scans through all the frequencies and spirits can supposedly manipulate this energy to form words or sentences.”

The TRIPS investigator asked Yoohyun and I if we wanted to give the box a try, so we turned down the lights and fired it up in the middle of the store.

And what we heard was a bit unsettling.

The static white noise was difficult for the ears to process at first, but soon the monotonous static had a clear rhythm that was broken up by small pops of barely audible speech.

“We have a couple of new guests this evening and we’re hoping you’ll at least speak up and say hello for us,” Rebecca said to whatever might be present as we began the experience. “As always, we come here with the utmost respect. We mean you no harm, we’re not here to chase you away or ask you to leave.”

The continual white noise from the spirit box and the dim lighting built up an eerie feeling in the room.

“How many spirits are here with us tonight?” Rebecca asked. 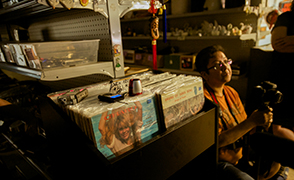 A few seconds later, we got the clearest spirit box response of the evening.

After gasps and some fearful chatter, Rebecca reassured us it was just the spirits being playful.

“I think its pranksters at work,” Rebecca said. “It doesn’t mean that there are 70 here, it just means that’s what they said. It’d be awfully crowded.”

Though the TRIPS investigators don’t know why the spirits are there, they believe the three spirits in the store – a man, a woman, and a child – aren’t malicious or harmful. Instead they seem to have a sense of humor. The investigators even brought the spirits cookies to see if it’d make them happy.

Kysar also doesn’t know why or how these paranormal events are happening.

“I’ve never had any experiences before, like I wouldn’t consider myself sensitive or anything like that,” Kysar said. “But I would say I’m an open-minded skeptic.”

We spoke with people from the nearby Laverna’s diner to see if they’d had similar strange experiences. Mike Blass, whose wife owns the diner, said he hadn’t seen any paranormal activities.

“There’s a few strange customers from time to time, but otherwise, it’s pretty normal,” Blass said. “I’ve never seen anything because if I did, I’d be out of here in a heartbeat.”

Despite being skeptical of the story, Blass did have an interesting thought about believing in spirits.

“Strange, strange things happen,” Blass said. “But I think it only happens to people who believe. So if you don’t believe, you’re fine. Do you believe?”

Pima County Library's Ghost in Tucson List Investigated Learning Physics by Launching Pumpkins Understanding walls: "The barrier that we create in our hearts must be broken to heal and grow".
By posting comments, you agree to our
AZPM encourages comments, but comments that contain profanity, unrelated information, threats, libel, defamatory statements, obscenities, pornography or that violate the law are not allowed. Comments that promote commercial products or services are not allowed. Comments in violation of this policy will be removed. Continued posting of comments that violate this policy will result in the commenter being banned from the site.