Katherine Tesch is the coordinator of the year-round program, which offers programs in everything from aerial acrobatics to dance.

"I think Circus is awesome because a lot of the kids come in and they see us do things and they're like 'that is impossible, I'm never going to do that', and then when they do it, they're like 'oh, when I work hard I can do things that are impossible...' so, that's for me the most important thing," Tesch said.

Along with running the all-ages Circus Arts program, Tesch is an aerial acrobat and performer with Flam Chen Pyrotechnic Theater. She performs aerials, stilts, fire spinning and also serves as co-director of the All Souls Procession. 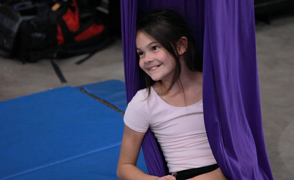 "I want them to get just a sense of confidence in themselves and also a sense of focus that they can use here and other places. And also just strength and exercise in general and just an appreciation for fitness," Tesch said.

Nola, one of Tesch's ten-year-old aerial silks protégés, said there are great rewards in the hard work.

"It's hard, it is, but once you've done something or accomplished something really cool, you have this great feeling inside you and you're like 'wow, I actually did that'", Nola said. "It's really a nice feeling."

Circus Tradition Continues for 7 Generations Measuring Loneliness "Beyond Earth's Edge: The Poetry of Spaceflight".
By posting comments, you agree to our
AZPM encourages comments, but comments that contain profanity, unrelated information, threats, libel, defamatory statements, obscenities, pornography or that violate the law are not allowed. Comments that promote commercial products or services are not allowed. Comments in violation of this policy will be removed. Continued posting of comments that violate this policy will result in the commenter being banned from the site.