"Fuddx" is a professional magician and balloon sculptor; he recently won bronze for his individual work at the World Balloon Convention. TWEET SHARE
(VIDEO: AZPM) 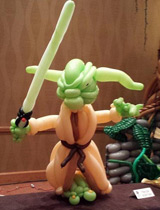 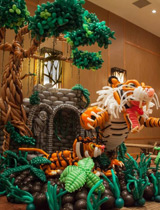 "I really enjoy kids...I like how honest they are, how willing to they're to live life, and they are amazed by things...adults aren't...they are a lot more jaded," he said. "Not always was it the most fun time for me being a kid, and I see that in some kids. I feel like this is at least a little part of bringing a smile where otherwise they might not...that means a lot to me."

Before Fuddx got into balloons, he said he thought it would be cool to become a custom character, "because I am always looking for a new and weird job."

In May 2009, he watched a documentary on Netflix about the craft. "That coupled with knowing how to blow up balloons," was what inspired him.

Fuddx recently participated in the World Balloon Convention in Denver, Colo. Among 1,000 participants from 53 countries, he received the bronze in the individual category for a rendition of the Star Wars icon, Yoda. He also helped the U.S. team with silver.

Chalk Art Fest Turns Sidewalks into Canvases USC Music Director Sings, Pays it Forward for Music Ed Jackets: Wardrobe Gems for Many Tucsonans
By posting comments, you agree to our
AZPM encourages comments, but comments that contain profanity, unrelated information, threats, libel, defamatory statements, obscenities, pornography or that violate the law are not allowed. Comments that promote commercial products or services are not allowed. Comments in violation of this policy will be removed. Continued posting of comments that violate this policy will result in the commenter being banned from the site.