How a group of UA undergraduates are saving the environment. by Laura Markowitz Tweet 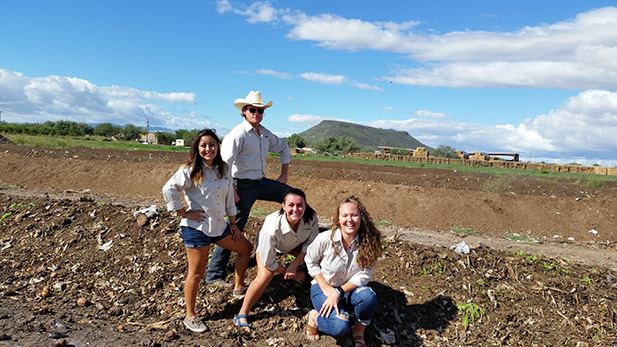 A few of the UA Compost Cats pose on a mound of compost that’s baking in the sun. From left: Clarisa Avalos, Chet Phillips (Project Supervisor), Alanna Gerardi and Caitlyn Hillis.
Laura Markowitz

But before you behold it, you smell it.

Fifty years ago, the motto of the Environmental Movement was “Reduce, Re-use and Recycle.” Back then, no one was talking about the problem of food waste. Today, scientists warn that it’s a major contributor to global warming. In the last five years, the University of Arizona’s Compost Cats diverted 11 million tons of organic waste from Tucson’s landfills and turn it into a profitable “green” business. That’s according to Project Supervisor Chet Phillips. It’s become one of the biggest composting operations in Southern Arizona. 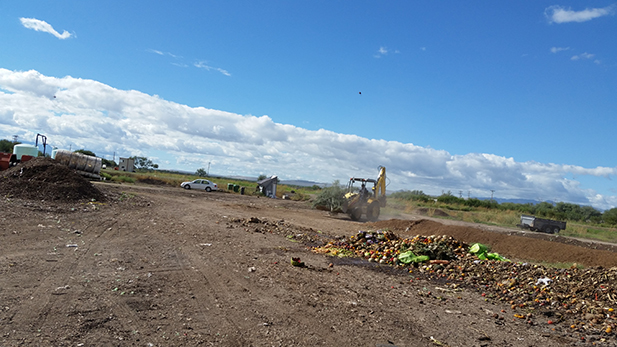 There’s really not much to behold when it comes to compost. The five-acre plot tended by the Compost Cats has long rows of mounded up organic material. In the most recent row you can still recognize whole tomatoes. Some of them still look edible. There’s also a pile of rotten cantaloupes. The rows further back have been cooking in the sun for a few months. They just look like lumpy brown soil.

“This whole project originated from a student idea,” says Phillips, to collect food waste from the Student Union and turn it into compost. The Compost Cats was originally funded through a Sustainability Grant from the Associated Students of the University of Arizona (ASUA).

“I wish I could go up to every single person and say, Hey! Finish your food!” – Alanna Gerardi, UA Compost Cat 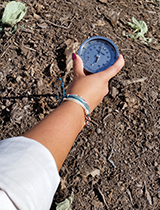 Compost Cats test the temperature of the piles several times a week to make sure they are cooking at around 131 degrees Fahrenheit, which kills germs and weed seeds. (PHOTO: Laura Markowitz)

“Being at the university and just watching these student, they have like their whole sandwich, and they just throw it in the landfill and they don’t actually think about where that’s going,” says Alanna Gerardi. “Or, who didn’t get a breakfast sandwich this morning. I wish I could go up to every single person and say, Hey! Finish your food!”

“One in five Americans go hungry every day,” says Jared Blumenfeld, who recently served as the Environmental Protection Agency’s (EPA) Regional Administrator. “A third of all the food in our country ends up in landfill. About 25 percent of all the fresh water in the United States is used to make food -- that we throw away.”

He presented the Compost Cats with a national award from the EPA last spring.

“Within 2 years you got more than a 1000% increase in the food scraps going into the compost,” he said during the award presentation ceremony. “This is an incredible example of what can be done.”

The Compost Cats do the heavy work with tractors. All 17 are OSHA-certified equipment operators.

What does it take to make compost on a large scale? First, it takes many hands. There are 17 Compost Cats, and they do everything to run the business -- from business planning and marketing, to training and farm work. Making compost requires frequent monitoring, says Chet Phillips. “We’re monitoring temperatures, we’re monitoring the soil; turning and watering about three times a week.” The Compost Cats do the heavy work with tractors. All 17 are OSHA-certified equipment operators.

When Compost Cats first started, students turned the piles by hand. Eventually, it was too much to do manually. They needed machinery, but tractors are expensive. So the Compost Cats partnered with the Community Food Bank of Southern Arizona, which closed its composting operation in Marana and had equipment it wasn’t using. The Food Bank lends it to the Compost Cats in exchange for 10 percent of the finished compost for their gardening programs. 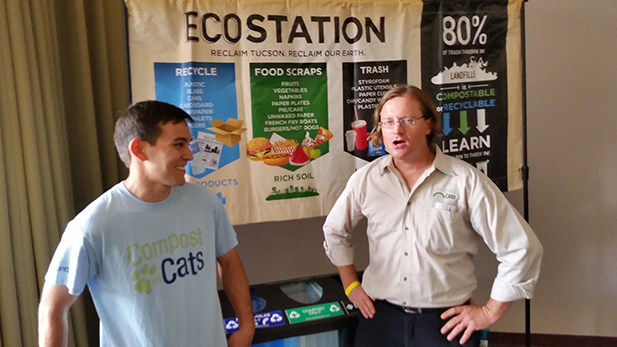 Joseph Ornellas (left) and Chet Phillips (right) are part of a Compost Cats Green Team at a trade show held at the Tucson Convention Center. They help attendees sort their recycling and food scraps, to keep re-usable waste out of the landfill.
Laura Markowitz

Chet Phillips says a key ingredient to building a successful composting business is partnerships. “We started at the campus Ag Center and ran out of space there. And San Xavier Farm Cooperative offered us a trade here at the tribal farm,” he says. The farm is down the road from the famous San Xavier Mission, in the Tohono O’odham Nation’s San Xavier District. The farm co-op takes 20 percent of the finished compost in exchange for use of land and water, and some equipment sharing.

The City and the Compost Cats teamed up last year to launch the Foodcycle Program.

Once they had space to grow (their operation takes up 5 acres of the farm), the Compost Cats needed more stuff to compost. “So we approached City of Tucson Environmental Services,” says Phillips.

They’re the ones with the garbage trucks. The City and the Compost Cats teamed up last year to launch the FoodCycle program. The City’s trucks pick up food scraps from stores and restaurants, and deliver it to the farm. Nearly every supermarket chain in town participates. So does the Tucson Convention Center, the Tucson Unified School District and Amphi Unified School District, as well as the University of Arizona and local restaurants.

And the Starr Pass Marriott Resort. The sprawling property overlooks a golf course in the Tucson Mountains. How easy is it for a big resort in Tucson to be part of FoodCycle? 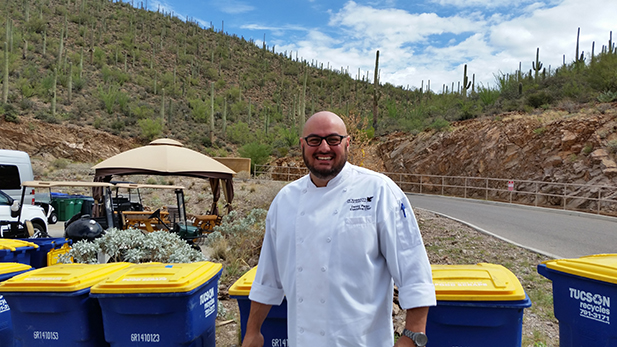 “This month we probably served over 40,000 people,” says Daniel Perez, Executive Chef and Director of Food and Beverage. We’re walking through the “back of the house” – that’s what he calls the hallways the connect the Starr Pass Marriott’s kitchens. He stops to see what’s inside a FoodCycle bin. It looks just like a blue recycling bin, but it has a yellow lid. This one is half-full of pineapple tops and melon rinds.

“They were cleaning fruit this morning for the buffets,” he says. Further down the hall, we’re behind the resort’s Starbucks. He takes a look in the bin. “So you can see all the coffee grounds go into the compost,” he says.

There’s also a plastic cup in the food scraps bin. He plucks it out. Plastic can’t be composted. Neither can meat, dairy or fish. “We’ve had to build new habits,” says Perez.

When the Starr Pass Marriott signed up to be part of FoodCycle, the Compost Cats came to the hotel to train Perez’s staff. The chef also explained to his staff of 125 why the hotel was participating in the new program. He told them, “Look, this is why we need the scraps. This is how long it takes for the soil to get re-energized with this process.” 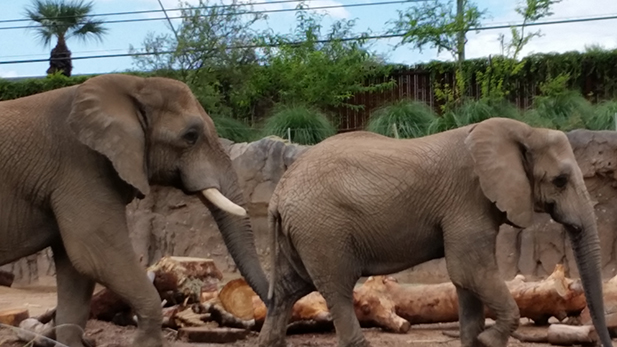 The Marriott buys from local farms, so “re-energized soil” means better-tasting food. To prove his point, he digs around in a box of produce that just arrived from Sleeping Frog Farms, in the San Pedro river valley, east of Benson. He plucks out one of the pears and takes a juicy bite and pronounces it “Delicious!”

After a few more bites, he tosses the remains of the pear into the FoodCycle bin. Tomorrow, the City will pick it up and take it to the Compost Cats. In around three months, it will be part of the compost that is spread over a garden, or maybe over a pear orchard. “That stuff’s coming right back in to our culinary plates,” says Perez.

“Re-localization is not just about getting fresh local vegetables in our restaurants, but re-localizing the sources of our fertility.” – Gary Nabhan, Director, UA Center for Regional Food Studies

“Re-localization is not just about getting fresh local vegetables in our restaurants, but re-localizing the sources of our fertility,” says Gary Nabhan, Director of the Center for Regional Food Studies at the University of Arizona. He says a sustainable local food system needs local compost. “Up until 5 years ago almost all the compost sold to gardeners and people who had backyard orchards in Tucson came from Ohio – by train!” 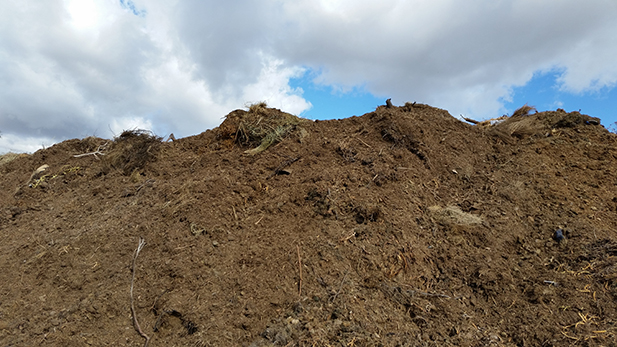 FoodCycle diverts around 225,000 pounds a month from Tucson landfills, according to Sherri Ludlam, an environmental scientist with the City of Tucson’s Environmental Services. All that waste comes from only 50 business and institutions, which currently participate in the program. Why doesn’t the City require everyone to sort their food scraps, the same way it requires everyone to sort recycling?

“It is certified by the American Composting Council, and it smells lovely!” – Sherri Ludlam, City of Tucson Environmental Services 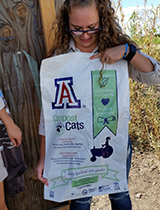 Caitlyn Hillis shows off the new Compost Cats compost bags. She wants you to note that the driver of the tractor in the silhouette has a pony tail. Project Supervisor Chet Phillips says, “The Compost Cats has always been an explicitly feminist organization.” (PHOTO: Laura Markowitz)

The FoodCycle program did expand into green waste, like tree trimmings and grass clippings from the City’s parks and golf courses. And it also includes brown waste such as “zoo doo.” Ludlam says the City’s Reid Park Zoo mucks out 6 tons of organic waste every week. The muck from herbivores like elephants is a valuable addition to compost. She says the City is also collecting horse manure from a half-dozen local riding stables and the Rillito Racetrack. All that brown waste is diverted from the landfill.

The Compost Cats use a recipe that calls for certain proportions of food scraps, green waste and brown waste to create compost. “It is certified by the American composting council, and it smells lovely,” says Ludlam.

Well, perhaps lovelier than it smelled before!

Compost is improving air quality in another important way, though. When organic waste breaks down in landfills it releases methane gas. Methane traps 23 times more heat in the atmosphere than carbon, which accelerates global warming. As the Compost Cats will tell you, they are keeping that waste out of the landfills, and turning garbage into gardens.

Tune in to Arizona Spotlight or log on to AZPM.org in two weeks for Feeding Our Future, Episode 7: The Politics of Produce Rescue, on NPR 89.1.

George Brookbank, Gardening Author and Advocate, Dies at 93 South Tucson Grow Your Own Food Program Extended Feeding Our Future: Farmers and Markets
By posting comments, you agree to our
AZPM encourages comments, but comments that contain profanity, unrelated information, threats, libel, defamatory statements, obscenities, pornography or that violate the law are not allowed. Comments that promote commercial products or services are not allowed. Comments in violation of this policy will be removed. Continued posting of comments that violate this policy will result in the commenter being banned from the site.