Donation 100 years ago went for Steward Observatory at eastern edge of campus. by Sara Hammond Tweet 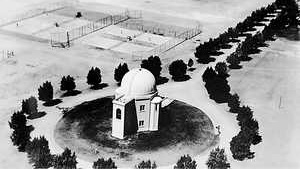 The University of Arizona’s world-leading work in astronomy and space sciences is the accumulation of a century of work. In fact, it was 100 years ago that the first money was donated for an observatory. It became known as Steward Observatory, named for the donor’s husband.

In 1916, philanthropist Lavinia Steward of Oracle made a gift to the UA to help pay for an observatory. A century later, Steward Observatory is unrivaled in astronomical observations and making mirrors for the world’s largest telescopes.

“That $60,000 dollars really started the ball rolling, especially on the research side, because it provided an instrument where astronomical research could be done at the university,” said UA astronomer Thomas Fleming, an instructor and the astronomy department's resident historian.

The money was a godsend to physics professor Andrew Ellicott Douglass, who wanted an observatory to rival Lowell Observatory in Flagstaff, which he had helped build. It took six years from the time of Lavinia Steward’s donation to the opening of the observatory with a 36-inch telescope.

“Professor Douglass, even before he dedicated the observatory in April of 1923, as soon as that telescope was built he wanted people looking through it. Not just students but members of the community,” Fleming said.

Douglass began evening public lectures, which continue to this day. 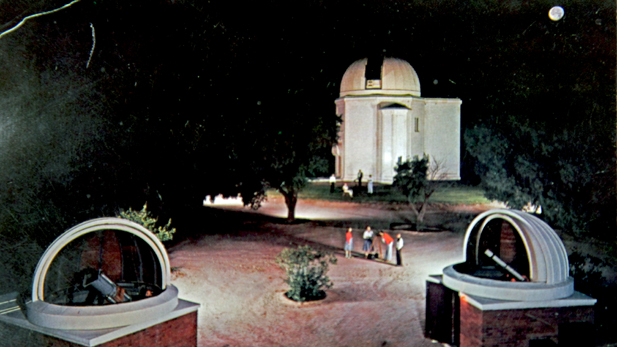 A picture postcard issued by the University of Arizona of Steward Observatory, 1955.
UA Libraries Special Collections

He selected the right place, as Fleming noted, saying Tucson is ideal for this science.

“Arizona and Hawaii are the only two states in the United States where the lighting conditions and the weather, climate conditions are still reasonable to do start-of-the-art astronomy,” he said.

Fleming teaches astronomy courses to UA students who are not planning to be scientists but who need science credits.

“The Department of Astronomy and Steward Observatory teach more students in the Eller College of Business than the College of Science.”

That’s a lot of growth over a century, including a time just 60 years ago when the faculty was so small that astronomy students could get personal instruction from the department chair, Edwin Carpenter.

Michael Chriss attended West Phoenix High and had the astronomy bug. He wanted to study at the university in Tucson.

“So 1952 is when I came to the university as a freshman. There were two permanent people and one part time person on the faculty in astronomy. I turned out to be the only one majoring in astronomy. And that was true the entire time I was there until I got my master's degree," Chriss said.

Chriss recalls arriving for class in the lobby of Steward Observatory.

“Dr. Carpenter, whose office was on the second floor, he would come down, and there I’d be at a table, just a regular table and a chair, cane back chair, that type of thing, and he would lecture, he would lecture as if there were a hundred people out in front of him,” he said.

Chriss says Carpenter’s teaching style inspired him to become an astronomy professor. He spent his career at colleges in California. He retired to Tucson, and four years ago, he became a lecturer at Steward, teaching the philosophy and history of astronomical thought.

Now, Steward and the astronomy department attract students from all over the world, such as junior Rafia Bushra.

“I’m from Bangladesh and I came here because I wanted to study astronomy. It is one of the top-ranked astronomy programs in the country. There are great facilities like the mirror lab and Mount Lemmon Sky Center," she said.

Bushra is working alongside astronomy professor Marcia Rieke on a camera for the James Webb Space Telescope that will launch into space in 2018.

Giovanni Fazio, a senior physicist with the Harvard-Smithsonian Center for Astrophysics, has collaborated with Steward faculty for decades.

"It is certainly one of the finest astronomy departments in the world. Over the years, one of the biggest roles they've played is in the field of infrared astronomy." Fazio said.

He credits the late Frank Low of Steward with getting him started in the field of infrared astronomy.

"If you want to study the very, very earliest galaxies in the universe, you need to look in the infrared," Fazio said.

Steward Observatory’s influence reaches far beyond the UA campus. Its telescopes are in operation throughout southern Arizona and in Chile.

The work done at Steward over the years spawned other scientific disciplines at the university, including creation of the science of tree-ring research and a lab that makes mirrors for observatories around the globe. And there’s the Lunar and Planetary lab, which is a leading NASA research center, and which mapped the moon for the manned landings.

UA Astronomer's Camera to Play Key Role in New Space Telescope Astronomer Helps Find Most Distant Quasar, Clue to 'Cosmic Evolutions' Universities in U.S. and Mexico Partner on Telescope Project
By posting comments, you agree to our
AZPM encourages comments, but comments that contain profanity, unrelated information, threats, libel, defamatory statements, obscenities, pornography or that violate the law are not allowed. Comments that promote commercial products or services are not allowed. Comments in violation of this policy will be removed. Continued posting of comments that violate this policy will result in the commenter being banned from the site.