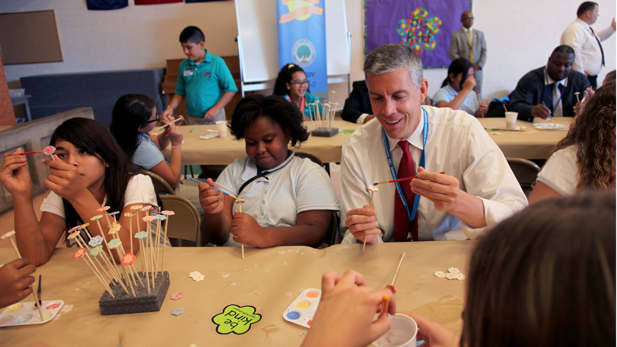 U.S. Secretary of Education Arne Duncan was in Tucson Wednesday as he started a four-state bus tour to highlight the importance of early childhood education and the need for efficient technology in the classroom.

The only way to learn about what is going on in public schools "is to get out of Washington," Duncan said.

"You have to listen, you have to learn what's working and what's not," he said. "I love talking to kids because they tell you the truth, what's going well and what's not so we want to go back and figure out how we can be great partners to the hard-working teachers and principals in Tucson."

Duncan began the Arizona part of his tour Wednesday morning by visiting Tucson Unified School District's transportation center, where he thanked bus drivers and mechanics for “getting our kids to and from school safely every day.”

After a brief meet and greet with bus drivers, Duncan and U.S. Secretary of Transportation Anthony Foxx boarded a TUSD bus and headed out to pick up students.

While on the bus, Duncan spoke with a TUSD transportation official about what it takes to transport thousands of students every day. As kids were picked up they joined Duncan and Foxx in the back of the bus. One girl showed Duncan her science project on the way to Dodge Magnet Middle School.

Duncan met privately with teachers and a teacher's union representative at Dodge before a student press conference in the library.

“This is a time of transition. The next couple of years will be hard,” he said. “Raising standards might be a little scary. That means the standards are going to be higher for you guys, but as you think about getting jobs when you grow up, think about how you’re not competing for jobs just in this district or this state.”

Foxx told students that transportation has a role in education and he wants Tucson to have more sidewalks so kids can walk to school and families can take walks and stay healthy.

One student asked if the officials had ever had dinner at The White House with President Barack Obama.

"I have, and we had pie," Duncan said with a smile on his face.

After a few quick stops to classrooms, Duncan painted "coins of kindness" with students in the cafeteria. The coins are part of the Ben's Bells project in Tucson and Duncan said he would take his to Washington D.C.

Duncan has been pushing for fewer textbooks and more digital media in schools. The U.S. Department of Education and the Federal Communications Commission are hoping every school can have access to broadband in the near future, he said. 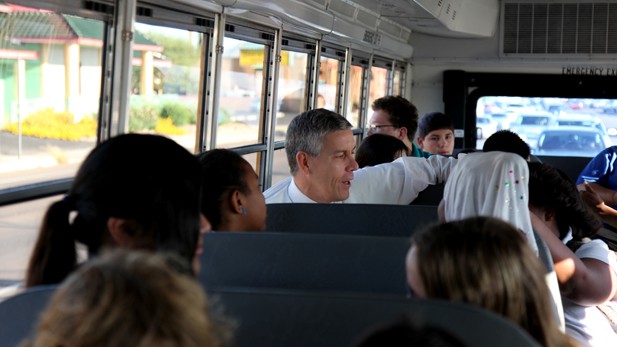 AZ Week: Brewer, State Helping Education Funds? Split Opinions New Survey Shows Dissatisfaction Among Teachers in S. AZ AZ Supreme Court: Legislators Must Fund Schools
By posting comments, you agree to our
AZPM encourages comments, but comments that contain profanity, unrelated information, threats, libel, defamatory statements, obscenities, pornography or that violate the law are not allowed. Comments that promote commercial products or services are not allowed. Comments in violation of this policy will be removed. Continued posting of comments that violate this policy will result in the commenter being banned from the site.