Interview with Celso Garcia, review of his tale of men assigned to dangerous job. by Mark McLemore Tweet 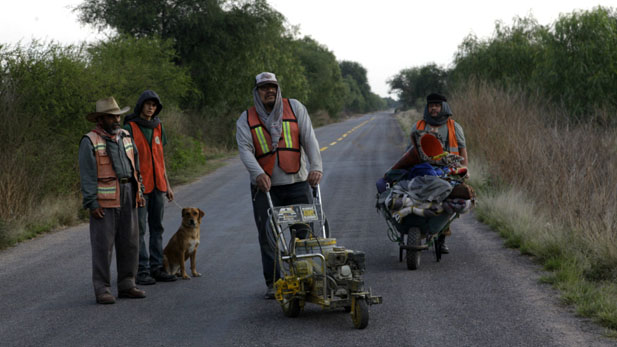 Since 2004, The Hanson Film Institute has presented the United States' longest running and most prominent showcase of Mexican films, the Tucson Cine Mexico Film Festival. This year, the Festival features the first film from director Celso Garcia, "La Delgada Línea Amarilla", or "The Thin Yellow Line". 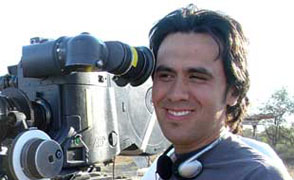 For three consecutive years, English language films from Mexican directors including Gravity, Birdman, and The Revenant have scored big at the Academy Awards. Mark McLemore talks with Celso Garcia, a Mexican filmmaker whose debut feature film is getting a lot of attention in his home country, and here in Tucson.

The film has been recognized with 14 nominations in the upcoming Ariel Awards, presented by the Mexican Academy of Motion Picture Arts and Sciences.

"La Delgada Línea Amarilla", or "The Thin Yellow Line", tells the story of a small group of impoverished men who take on the dangerous and backbreaking job of painting the yellow line on more than 100 miles of desert highway in only a few days. McLemore begins by asking director Celso Garcia why he chose this story to tell in his first feature film…

Here is film writer Chris Dashiell with his review...

For most of us, work takes up the majority of our lives—forty hours a week or more. And yet, it is rare for a film to focus on this pervasive reality. The general opinion is that there’s not enough drama or excitement there, which is what we usually look for in an entertainment. No doubt there is also a desire to avoid the painful aspects of work. 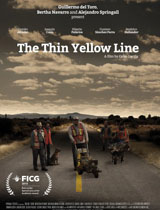 For his debut feature called The Thin Yellow Line, writer-director Celso R. Garcia has bravely tackled this neglected topic. His story is about some of the most humble and least noticed workers you can imagine—the guys that paint the yellow dotted lines down the center of the highway. And along this journey, the film celebrates the people who persevere through poverty and struggle in Mexico.

The Thin Yellow Line opens with a melancholy older man named Toñio getting laid off from his job as a watchman at a junkyard. To misfortune is added the indignity of being replaced by a dog. Toñio then travels around in his Chevy truck looking for work. The economy is bad everywhere. Finally he manages to get a job pumping gas, but the boss has a habit of being late with the paycheck. At night, sad and reflective, Toñio looks through a little box of photos and clippings. We find that at one time, he had a wife and a son, but what happened we don’t know.

He gets a break when an engineer from a former construction job stops for gas and recognizes him. Eventually the man offers him a job: to paint the yellow lines on a long country highway for 210 kilometers, about 130 miles, and to finish in 15 days, before the rainy season starts. The engineer gathers a motley crew for Toñio to supervise: an out-of work truck driver, a former circus handyman, an ex-con, and a sullen teenager. They are walking through the desert of San Luis Potosi in east central Mexico, most of the time in the full sun, performing a dull and repetitive task that wears down their minds as the heat wears down their bodies. And although two of them wave warning flags at each end of the procession, the few passing vehicles often go by at top speed, posing considerable danger. 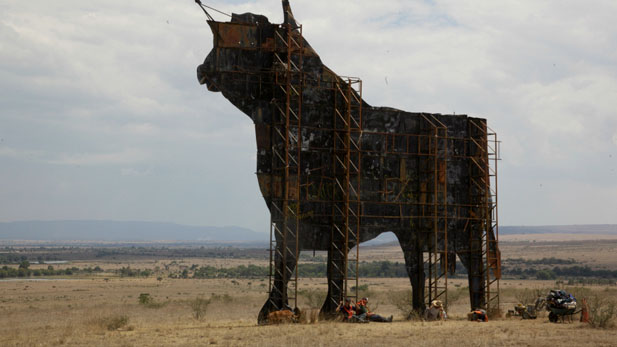 Naturally, the five men get to know each other well, and there are conflicts. At times there are breaks in the work, for instance when they go to town for supplies and end up at a little carnival, or when they ask for shelter at a hacienda during a rainstorm. In these scenes we learn the back story of each character. These are ordinary, decent men, with wounds from the past that have brought them to this point in their lives. The film creates a special dramatic tension between Toñio and the rebellious teen Pablo—the older man’s strict demeanor towards the boy reflecting a secret grief.

As a rookie filmmaker, Garcia sometimes falls into predictability in his situations, and a psychology that can sometimes seem a little too pat. But his skill at evoking the lives of poor people, their humor and self-respect, along with an excellent visual sense for the desolate yet beautiful landscape, makes up for any flaws. The Thin Yellow Line is an authentic and down-to-earth portrait of working people.

Chris Dashiell has been writing about movies for twenty years, serving as the editor of the online film lovers' guide Cinescene for ten of them.

He currently reviews films for Flicks, a weekly program on Tucson's community radio station KXCI, and makes regular appearances with essays about films and the topics that surround them for Arizona Spotlight, and is a regular contributor to the podcast Let's All Go to the Lobby!.

"Let's All Go to the Lobby!" Luis Buñuel Movies vs. Cinema
By posting comments, you agree to our
AZPM encourages comments, but comments that contain profanity, unrelated information, threats, libel, defamatory statements, obscenities, pornography or that violate the law are not allowed. Comments that promote commercial products or services are not allowed. Comments in violation of this policy will be removed. Continued posting of comments that violate this policy will result in the commenter being banned from the site.